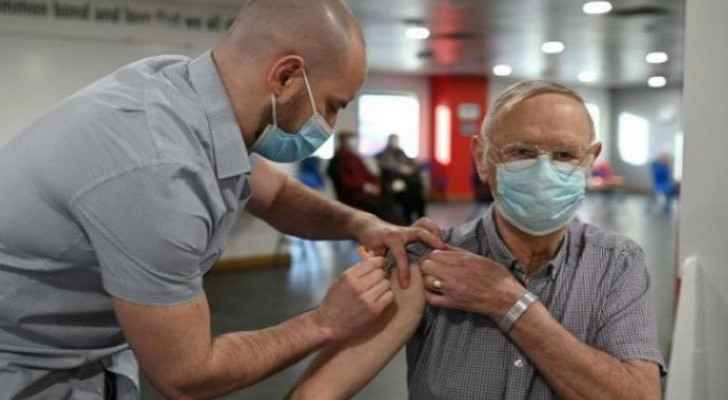 Monday, the UK government announced that over 20,089,551 people have received the first dose of the coronavirus vaccine in Britain, while 796,132 have received both doses.

The announcement comes at a time when the pandemic-devastated country, with a population of roughly 66 million people, is concerned about the discovery of the Brazilian mutated COVID-19 strain on its soil, which is considered increasingly dangerous.

In turn, UK officials said they were searching for one of six people who were infected with the Braziliant variant.

Public Health England said Sunday that three cases of the variant had been detected in England and three in Scotland, but that the identity of one of those carrying the virus was unknown as they had not provided their contact details.

The P1 variant, also known as the B1128 variant, shares some of the same mutations as the highly transmissible South African variant and was first identified in Manaus, Brazil, in January. It is thought that it could respond less to current vaccines.

Meanwhile, Prime Minister Boris Johnson wrote on Twitter: "20 million people across the UK have now got the jab – a huge national achievement and a testament to the tireless work of NHS staff, volunteers, the Armed Forces & many more. I urge everyone to get the jab when called. Every jab makes a difference in our battle against COVID."

For his part, Health Secretary Matt Hancock said he was "delighted" to have crossed this new threshold.

In a video posted on Twitter, Hancock thanked "everyone who came to receive the dose, because we have become more confident than before that the vaccine protects you, protects your community, and it is also the way out for us all."

"There is still a long way to go, but we are making great strides," he added.

The United Kingdom has been hit hard by the pandemic, which has killed about 123,000 people, and is relying on mass vaccinations to exit the lockdown in effect since January to contain a highly contagious wave of the coronavirus, which is attributed to a mutated virus that appeared in southern England.

"With the increase in vaccine supplies scheduled for March, we intend to speed up even more as we approach Easter," said the Director of Public Health England, Simon Stevens.

With the vaccination campaign launched in early December, which is one of the most advanced in the world, the government aims to give the first dose to all persons over the age of 50 by April 15, and then to all adults at the end of July.

The vaccination campaign will continue by age instead of workers high occupational risk, such as police and teachers, based on the recommendation of the scientific committee supervising the campaign.

Also Read: UK's next phase of vaccinations to be based on age rather than occupational risk

The government had achieved its goal of vaccinating about 15 million people over the age of 70, caregivers, residents and workers in nursing homes, in mid-February, using the Pfizer-BioNTech vaccines and now the AstraZeneca-Oxford vaccines.

The government called on the population not to be complacent and to continue to respect preventative measures.