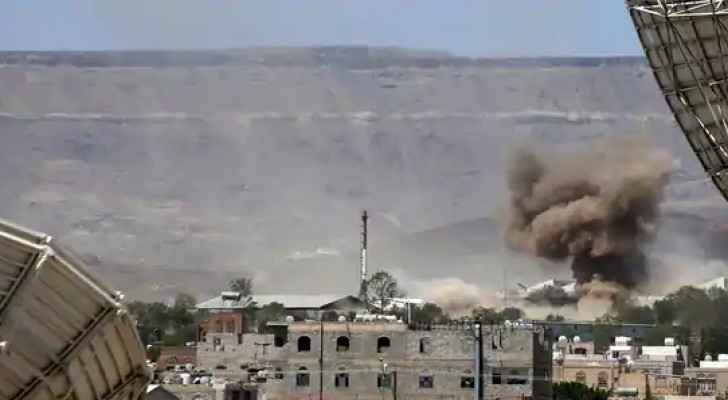 22 Iraqi militants loyal to Iran were killed as a result of an American bombing Thursday night on their infrastructure in eastern Syria, in the first military operation of the Biden administration in response to recent attacks on Western interests in Iraq.

Biden said on Friday that US air strikes in eastern Syria should be viewed by Iran as a warning.

Biden added during a tour of Texas to inspect the damage caused by a storm that struck the region, "You will not go unpunished. Beware," directing his warning to Tehran.

The strikes condemned by Damascus and its ally Moscow came against the backdrop of tension between the United States and Iran over the Iranian nuclear file and a return to the negotiating table.

On Friday evening, the White House said the United States had sent a "unambiguous message" by conducting the strikes.

Spokeswoman Jane Saki said that President Joe Biden "is sending an unequivocal message that he will act to protect Americans. And when threats are made, he has the right to take action at the time and manner he chooses."

For his part, Pentagon spokesman John Kirby said that the two F-15s of the "Strike Eagles" dropped seven precision-guided munitions Thursday on facilities in eastern Syria used by armed groups believed to be behind a series of missile attacks on US forces in Iraq.

In a statement, Kirby described the strikes as "defensive," explaining that they destroyed "several infrastructures located at a border point used by Iranian-backed militias," specifically the Hezbollah Brigades and Sayyid al-Shuhada, which were part of the Iraqi Popular Mobilization Forces.

The Syrian Observatory for Human Rights counted at least 22 dead from Iraqi factions loyal to Iran, most of them from Kataib Hezbollah.

In a statement, the Hezbollah Brigades described the American strike as “a heinous crime in violation of international law and insulting to the sovereignty of Iraq.”

It also considered it “a barbaric aggression (...) without any doubt that the aggressive American policies towards our peoples do not change with a change in their administration."

Iraqi authorities have deployed the Popular Mobilization Forces (PMF), a coalition of prominent Iraqi paramilitary factions, along the straddling border with Syria since declaring victory over the Islamic State in 2017. The PMF leadership denies its factions operate outside Iraq, but fighters from groups affiliated with it are participating in the fighting inside Syria.

According to the observatory, the American raids destroyed three trucks carrying ammunition at one o'clock in the morning (23:00 GMT), the moment they entered from an illegal crossing from Iraq to the south of the city of Albu Kamal in the eastern countryside of Deir Ezzor.

The area between the cities of Albu Kamal and Al-Mayadeen is under Iranian influence, through pro-Iranian groups fighting alongside the Syrian regime forces. Often, trucks transporting weapons and ammunition or warehouses in the region are subjected to strikes attributed to the Israeli Occupation, which often affirms its intention to end the "Iranian position" in Syria.

On Friday, Israeli Occupation Prime Minister Benjamin Netanyahu said in a statement, "As long as I am prime minister, Iran will not have nuclear weapons. I will do everything to prevent that, and I told this to President Biden. With or without agreement."

The Syrian Foreign Ministry condemned the "cowardly American aggression," saying that it "constitutes a negative indicator" of the policies of the new US administration.

And she warned in a statement that it would "lead to consequences that would escalate the situation in the region," calling on Washington to "change its aggressive approach towards it."

The Iraqi Ministry of Defense denied receiving information from the US side before the bombing was carried out, while Russian Foreign Minister Sergey Lavrov announced that Washington notified the Russian army only four or five minutes ago. "This kind of warning, when strikes are being carried out, is of no use to us," he said.

While Biden waits for a response from Tehran about returning to the negotiating table, Kirby said that the strikes came "in response to the recent attacks on the American crew and coalition forces in Iraq and the ongoing threats against them."

On Monday, missiles fell near the US embassy in Baghdad, while Saturday’s bombing targeted the Iraqi air base of Balad, located to the north, wounding an Iraqi employee in an American company responsible for maintaining F-16s.

On February 15, missiles hit a military base where the international coalition forces against ISIS are stationed at Erbil Airport (north). Two people were killed, one of them a foreign civilian contractor working with the coalition.

Although Kataib Hezbollah has not claimed responsibility for the attacks, US Defense Secretary Lloyd Austin confirmed that the faction was responsible for them. "We are sure of the target we chose," he told reporters on a plane that took him to Washington after a quick tour of the USS Nimitz aircraft carrier off the coast of California. He added, "We are sure that our target was the militia that carried out the recent attacks" against Western interests in Iraq.

The recent attacks came after months of relative calm in the framework of a truce agreed by the factions loyal to Iran in the face of threats from Washington to close its embassy in Iraq.

A Pentagon spokesman affirmed that "this equal military response was carried out in parallel with diplomatic measures, in particular consultations with partners" of the international coalition.

After the recent shooting, Monday, Washington announced that Iran would bear "responsibility for the actions of its partners who attack the Americans," but stressed that its forces would avoid "escalation."

The strike at dawn appeared to be a warning to Tehran.

Darren Khalifa, researcher at the International Crisis Group, told France Press that Washington appears to be sending "a signal that it will not tolerate Iran's regional activities in favor of nuclear talks."

According to Nicholas Heras, a researcher at the Institute for War Studies, the Biden administration sends messages to "opponents of his Iran policy at home that the United States is capable of being cruel toward Iran," and to the Israeli Occupation that Washington is also capable of striking groups affiliated with Iran.

He added that "the recent strikes are not related to what happened in Iraq only, but rather they are part of a wider diplomatic game towards Israel and the Republican Party."

The US military had previously announced at the end of the year 2019, the bombing of five bases of the Iraqi Hezbollah Brigades in both Syria and Iraq, after an American was killed in a missile attack on an Iraqi military base.