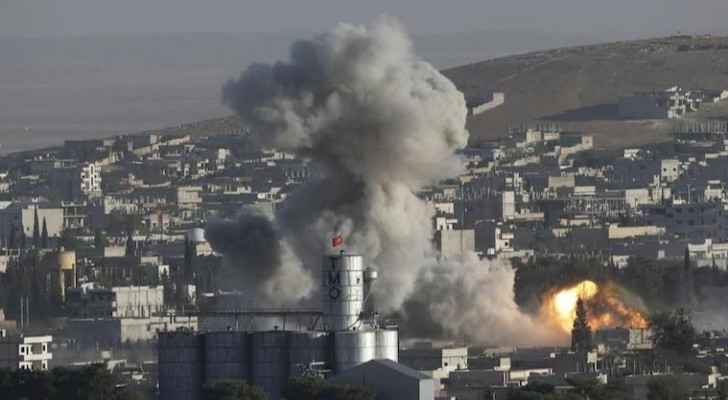 The airstrikes were in response to the recent attacks on Western interests in Iraq.

In a statement, US Defense Department spokesman John Kirby described the bombing as "defensive," explaining that the strikes destroyed "many infrastructure located at a border point used by Iranian-backed militias."

He named Kataib Hezbollah and Sayyid al-Shuhada, two factions within the ranks of the Iraqi Popular Mobilization Forces.

According to Kirby, the strikes came in response to the recent attacks on the American crew and the coalition forces in Erbil.

The official Syrian TV reported in an urgent tape on Friday morning about "American aggression" that targeted with air strikes "areas on the Syrian-Iraqi border," without any further details.

According to the observatory, the American raids destroyed three trucks carrying ammunition south of the city of Albu Kamal in the eastern countryside of Deir Ezzor. The director of the observatory, Rami Abdel-Rahman, said that the trucks were targeted the moment they entered Syria via an illegal crossing from Iraq at 1 am (23:00 GMT).

The area extending between the cities of Al-Bukamal and Al-Mayadin in the eastern countryside of Deir Ezzor is under Iranian influence, through pro-regime groups fighting alongside the Syrian regime forces. Often, trucks carrying weapons and ammunition or warehouses in the region are subjected to strikes attributed to the Israeli Occupation, which often confirms its intention to end the "Iranian position" in Syria.

While President Joe Biden awaits a response from Tehran before reinstating the deal that Washington withdrew from in 2018 under the Donald Trump administration, three attacks have been attributed to pro-Iranian militant groups in recent days.

On Monday, missiles fell near the US embassy in Baghdad, while Saturday’s bombing targeted the Iraqi air base of Balad, located to the north, wounding an Iraqi employee in an American company responsible for maintaining F-16s.

On Feb. 15, missiles hit a military base in Erbil where the international coalition forces against Daesh are stationed. Two people were killed, one of them a foreign civilian contractor working with the coalition.

Although Kataib Hezbollah did not claim responsibility for the attacks, US Defense Secretary Lloyd Austin confirmed that this pro-Iranian organization was responsible.

"We are sure of the target that we have chosen," he told reporters on a plane that took him to Washington after a quick tour of the USS Nimitz aircraft carrier off the coast of California.

"We are sure that our target was the militia that carried out the recent attacks" against Western interests in Iraq, he added.

The recent attacks came after months of relative calm as part of a truce that the pro-Iranian factions accepted in the face of threats from the United States to close its diplomatic mission in Iraq.

A Pentagon spokesman affirmed that "this equal military response was carried out in parallel with diplomatic measures, especially consultations with partners" of the international coalition.

"The operation sends a clear message that President Biden will protect American and coalition forces," he added. "At the same time, we acted in a calculated manner in order to calm the situation in eastern Syria and Iraq," he said.