Jordanian-Chinese couple speaks out about their relationship

Jordanian-Chinese couple speaks out about their relationship 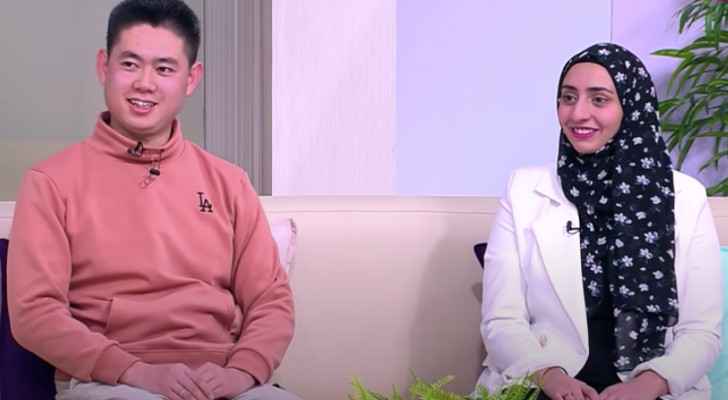 Naser and Hadeel are an interracial couple that has gone viral across social media platforms in the Middle East.

Naser is originally from China and Hadeel is Jordanian.

They launched a YouTube channel at the end of 2020, where they share videos from their daily routine. The clips show them learning more about each other’s cultures, languages and traditions.

In an interview with Roya’s Donya ya Donya, Hadeel explained that the couple met in university, when Naser came to Jordan as part of a student exchange program.

Naser said that he loves Jordan, especially the food such as mansaf, kabsa, maglouba and lentil soup. He added that he likes the people of Jordan because they are friendly, and love to talk and meet new people.

Hadeel said that she loved visiting China and, even though there is a language barrier, communicating with Naser’s family has not been an issue. She added that she also loved the food, especially spicy Malatan and hotpots.

The couple spoke about bullying, which was not a big issue before they started getting popular on social media. Hadeel said people respect them more in real life, knowing there are laws to protect them, but on social media it is much worse.

The couple is even more concerned about the bullying now that they have a daughter together.

In an interview with DW’s Jaafar Talk, they exchanged supportive words in their own languages. In Arabic, Hadeel said “Honestly, despite the many challenges we face and that sometimes a lot of people say hurtful things to you because of your nationality, looks or skin color…I apologize on their behalf and I will stay with you forever, God willing… I will encourage you, support you and won’t let anyone hurt you. I love you!”

In Chinese, Naser said “Thank you for your sweet words about me. I don’t care about the bullying on social media. Thank you for caring about me and for always being my friend, supporting me, encouraging me and standing by my side. I love you so much. Thank you!”