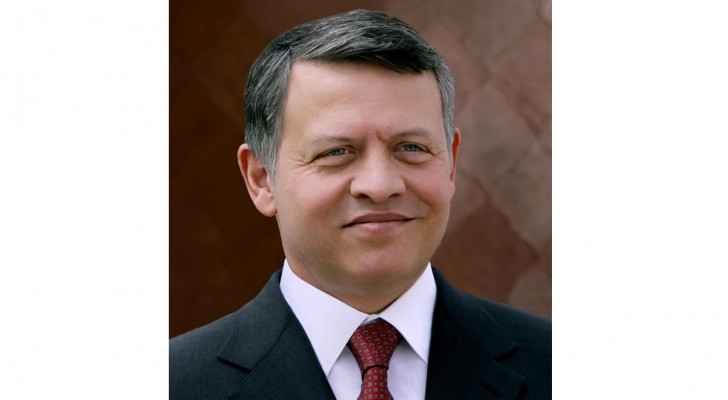 His Majesty King Abdullah II Thursday delivered an address at the virtual "Middle East and the new US administration" conference, held by the Brookings Institution between Feb. 22 and 26.

His Majesty spoke about the latest regional and international developments, the most prominent of which is the Palestinian cause, as well as efforts to bolster regional security and stability, counter the COVID-19 pandemic, and fight terrorism and extremism.

His Majesty reaffirmed Jordan’s steadfast position on the Palestinian cause and the need to resolve the Palestinian-Israeli conflict on the basis of a two-state solution, guaranteeing the establishment of an independent, sovereign and viable Palestinian state on June 4, 1967 lines, with East Jerusalem as its capital, living in peace and security alongside the Israeli Occupation.

Turning to the United States’ vital leadership role in bolstering security and stability in the region, the King lauded US President Joe Biden’s renewed commitment to international engagement.

Below is His Majesty's full speech, as reported by the Jordan News Agency (Petra):

"In the name of God, the Compassionate, the Merciful,

Thank you for the invitation to speak today. It is my pleasure to join you again, this time virtually, at the Brookings Institution. Your Centre for Middle East Policy plays a great role in enabling US policymakers to better understand our part of the world.

The United States is of course no stranger to the Middle East, and its leadership is key to regional security and stability. We are heartened by President Biden’s renewed commitment to international engagement.

In these difficult times, America’s balanced voice and values are greatly needed to restore momentum to a partnership-based global system that puts the health and wellbeing of all peoples at the heart of its priorities.

And the United States will always have a steady partner in Jordan. Our relationship is a friendship and a joint commitment that extends over seven decades. It is a relationship we have proudly built together, over the years.

The most immediate challenge is COVID-19. This devastating pandemic has robbed our world of over 2 million precious lives, but we may be able to avoid further tragedy and high mortality rates by ensuring the equitable distribution of vaccines around the world.

We cannot afford to leave anyone behind. And Jordan is doing its part. We have, once again, stepped up to the plate and included refugees in our national COVID response and vaccine distribution plan. The first refugee in the world to receive the vaccine for free was in Jordan.

Even if the stories of refugees have slipped from the 24-hour news cycle, the world must be reminded that the crisis is far from over.

Supporting the international agencies at the forefront of relief efforts the World Health Organisation, the UNHCR, and UNRWA is essential to enable them to assist vulnerable communities in averting the far-reaching implications of the pandemic on health, livelihoods, education, and food security.

Old threats, though now lurking beneath the surface, also continue to haunt our world. Directing our attention and resources to countering the pandemic, has taken away from our focus on fighting terrorism and extremism.

Although the battle may be won, the war is not yet over. Rising inequalities and emerging crises caused by the pandemic will fuel the recruitment efforts of ISIS, Boko Haram, Al Shabaab, and Al Qaeda.

In addition to the economic and humanitarian effects of COVID, the region continues to cope with the ramifications of conflict and displacement, in countries like Syria and Yemen.

We look, once again, to US leadership and cooperation with its partners in the Middle East and elsewhere, to counter these threats.

When I had the pleasure of addressing your esteemed institution at the inauguration of your Centre for Middle East Policy 19 years ago, I spoke about the need to resolve the Palestinian-Israeli conflict, the core issue in the Middle East. And I am sure your scholars have written countless papers about this very topic since, so you can only imagine the frustration of the people still living in the midst of this protracted conflict, unable to move forward.

Occupation and peace simply cannot coexist. The Palestinian people have a right to an independent, viable, and sovereign state on the June 4th, 1967 lines, to live alongside Israel in peace and security.

There is no alternative to the two-state solution, and continued unilateral steps will only kill the prospects of peace.

Occupation, injustice, despair, apartheid history has shown us there are no winners in this formula, only losers and tragedy.

There is an opportunity to build on recent positive developments. We need to restore hope in the viability of peace and bring our youth closer to a future that, for so long, has been tantalisingly out of reach.

And the United States’ leadership here is essential.

Jordan will always be ready to play its part in any efforts to relaunch peace negotiations, and we remain committed to the Hashemite Custodianship of Islamic and Christian holy sites in Jerusalem, to safeguard the city’s character. Preserving Jerusalem, as the city of faith and peace, is a responsibility that we all share.

Jordan this year marks its centennial as a state. In these past 100 years, we have learned to navigate numerous regional and global crises. We have gained the spirit of resilience and confidence that moves us today.

But we have also learned that ongoing injustice in our region, will continue to hold us all back. Prosperity in the Middle East and its positive dividends for the whole world cannot come to fruition without peace.

It is time to turn towards conflict resolution, not management, and focus on the end goal, instead of losing ourselves in the process. We owe this to our world. So let us learn from past mistakes and take the higher path of peace."

For his part, Brookings Institution President John Allen praised His Majesty’s guidance and thoughts on Middle East peace efforts, highlighting Jordan’s role as a vital partner to the United States in the region.

The Brookings Institution, founded in 1916, is seen as a highly influential think tank specialised in international public and foreign policy research, as well as global economics and development. The King was the inaugural speaker at the launch of the institution’s Centre for Middle East Policy in 2002.

The conference held with the participation of heads of state, government officials, diplomats, policy experts, researchers, and academics is an effort to bolster international dialogue with the aim of building a deeper understanding on key regional and global issues among policy leaders in the Middle East and North Africa region and the United States.

King says Palestinian cause at core of Jordan’s diplomatic ....

King says Palestinian cause at core of ....