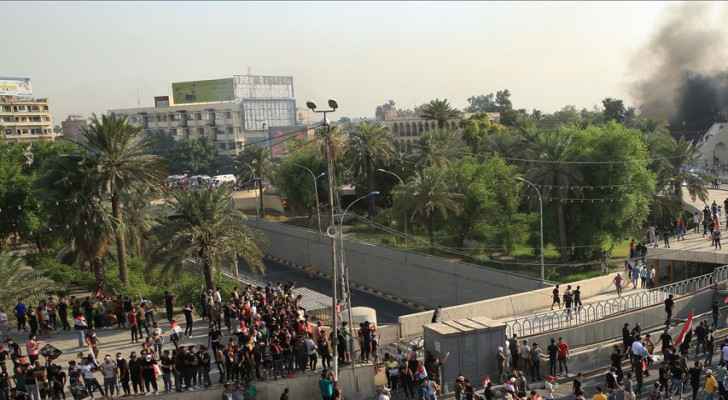 Military and security sources reported to Agence France-Presse that missiles were fired Monday at the US embassy in Baghdad, but fell close to the huge complex located in the heavily fortified Green Zone, in the third attack targeting Western interests in Iraq within a week.

The Iraqi security services stated in a statement that at least two rockets landed inside the Green Zone, where the headquarters of foreign embassies, including the United States, are located.

A security source inside the Green Zone said that the anti-missile defense system at the US embassy did not fire to intercept the missiles because they were not directed to fall inside the diplomatic compound.

And a US-led coalition in Iraq since 2014 to help Iraqi forces fight Daesh has been overseeing a base near the US embassy.

"The coalition has reported no damage or injuries," coalition spokesman Wayne Maruto said on Twitter.

The Iraqi military said at least another missile landed in the nearby residential al-Harithiya neighborhood.

A resident of the neighborhood told France Press that the missile struck a multi-storey car park.

No one immediately claimed responsibility for the attack, but the army said it had located the rocket launch site in a neighborhood north of Baghdad.

Shortly after this bombing, the United States warned Iran that it would hold it "responsible" for the actions of its followers in Iraq, but at the same time it affirmed that it would not seek to escalate the conflict.

"We will hold Iran responsible for the actions of its followers who attack the Americans" in Iraq, said State Department spokesman Ned Price, explaining that US forces would avoid contributing to "an escalation in the interest of Iran."

The attack comes a week after more than 12 missiles targeted a military compound at Erbil airport in northern Iraq, where foreign forces from the US-led coalition have been stationed and have been helping Iraq fight Daesh since 2014.

At that time, two people were killed, one of whom was a foreign contractor working at the airport, who died on the spot and a civilian died of his wounds on Monday.

Saturday, another batch of missiles were fired at Al-Balad Air Base, north of Baghdad, where Iraq maintains most of the F-16s it has purchased from the United States in recent years.

According to security sources, at least one person was wounded, a local contractor for the US company Sallyport, which provides aircraft maintenance.

Responsibility for the attacks is usually claimed by unknown factions, which Iraqi and US officials say are a façade behind which militant factions loyal to Iran are covering up inside Iraq.

Iraqi Prime Minister Mustafa Al-Kazemi has pledged to stop the missile attacks, but he has difficulty holding the factions responsible, much to the wrath of the United States.

In October, the United States threatened to close its embassy in Baghdad if the attacks did not stop and militant groups agreed to an indefinite truce.

There have been several violations intermittently since then, but last week saw the largest number of attacks in months.

Pope Francis to arrive in Baghdad ....