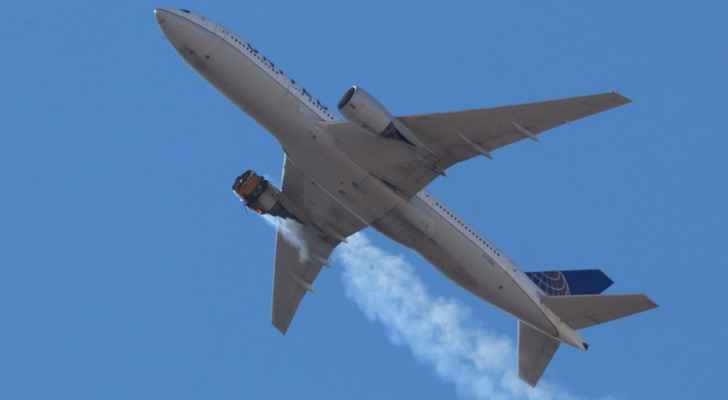 Several airlines, including United Airlines and the two main Japanese airlines, decided to stop using their "Boeing 777" aircrafts on Sunday and Monday after the engine of one of the planes burned out over Colorado.

A Boeing Group spokeswoman confirmed to France Press on Monday that a decision had already been made to stop using the world's 128 Boeing 777 aircraft equipped with the Pratt & Whitney engine.

Companies are applying the recommendation of the American Boeing Group, which has requested that 128 777 commercial aircraft be stopped from being used worldwide.

The US Civil Aviation Authority has ordered additional audits of some Boeing 777s.

The US National Transportation and Security Authority is investigating the incident, which left no casualties.

"During the investigation, we recommended that we suspend the use of 69 777s in service and 59 aircraft equipped with the Pratt & Whitney 112 4000 engine," Boeing said in a statement.

United announced that it has voluntarily withdrawn from service 24 Boeing 777s and expects "that a small number of customers will be affected by this measure."

Japan's Transportation Ministry said it had ordered tougher engine checks after Japan's Boeing 777 aircraft encountered problems with a "similar engine" during a flight from Tokyo airport to Okinawa island in December.

The South Korean Ministry of Transport announced that it does not currently intend to stop using its aircraft and is monitoring the situation closely.

But "Aziana Airlines", a South Korean airline, decided to stop using the seven 777s in its fleet.

Korean Air, the first airline in the country, which announced earlier to France Press that it had suspended the use of its six Boeing 777s equipped with the "BW 4000" engine, it confirmed that it was awaiting official recommendations from the South Korean regulators.

In a statement posted on Twitter, the Director of the US Civil Aviation Authority, Steve Dixon, said that after consulting with his team of aviation safety experts, they were asked to publish a directive requiring immediate and in-depth audits of Boeing 777s equipped with Pratt & Whitney 4000-112 engines.

The Boeing 777-220 United Airlines plane just took off from Denver to Honolulu Saturday, with 231 passengers and 10 crew members on board, and was forced to return to the airport and make an emergency landing after a fire broke out in its right-hand engine.

The plane landed on the tarmac without problems, and no one was injured.

Local authorities said that some large-scale debris was scattered over a residential area in Broomfield, a suburb of Denver.

Boeing, in recent years, has faced scrutiny over its 737 fleet, which has been involved in several accidents.

Wreckage of passenger plane falls over residential area in ....

Wealthy Saudi actress to fly Qatari pilgrims out to Hajj ....