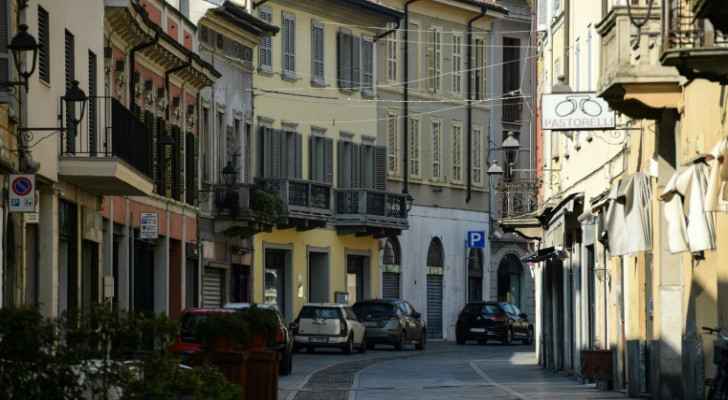 In the Italian city of Codogno, it is difficult to notice the damage caused by the coronavirus in the city, which recorded the first infection with the disease in Italy a year ago.

However, behind dozens of marble statues of kneeling angels and ornate stone burials, a new, less visible series of graves testifies to the losses caused by COVID-19 in the city of 15,000 people located in northern Italy.

Sunday, Codogno commemorates the one-year anniversary of the first coronavirus infection in Italy.

A year ago, the virus spread like wildfire in the Lombardy region, the economic lung of the country, which fast became the global epicenter of the virus in February.

But when the ambulance siren sounds, tragic memories return to life. Amy Cavalli, owner of the "Central Bar" in the main square in the city, recalls the first days of the closure imposed in Codogno and ten other cities in the north of the country after the first infection with the virus.

"I remember the silence (...) that is interrupted by the sound of an ambulance siren every three minutes. We used to ask ourselves: Who are you seeing? Who will be next?"

Codogno Mayor Francesco Passerini indicated that his city recorded 154 deaths in March 2020, compared to 49 deaths a year ago. He told France Press that the cemetery staff "could not keep up" the pace of work.

Amidst the huge number of deaths, coffins piled up waiting to be buried in a church, the cemetery was closed to the public, and parole papers were published without the burial date to prevent residents from violating the quarantine to honor the deceased.

The arrival of the coffins constituted sad surprises for Roberto Codazzi

At that time, Red Cross teams were roaming the city, taking about 20 patients daily to the emergency room.

"When we were receiving a call, we did not know what we would find," the head of the emergency department at the Red Cross, Luciano Parmigiani, told AFP.

Around the same time, Andrea Lodzi, a treating physician, was working day and night to treat his patients and avoid taking them to hospital. The doctor, who does not like to talk much to the media, wrote on his Facebook page how his city has gradually managed to get out of the crisis.

"What a huge relief! Today I finally managed to say to four of the patients: 'Well, they have recovered,'" he wrote in a post on March 11.

A month after registering his first case of the disease, he said, "I don't know how far we have to go, but we know we will succeed in getting out" of the impasse.

The closure imposed in Codogno, of course, contributed to the improvement of the situation in the city, after which all eyes turned to Bergamo, 70 km to the north, where pictures were taken that spread around the world that showed military convoys carrying coffins.

While the national death toll rose to 4,825 deaths a month after the first case was recorded in Codogno, some questioned whether the isolation imposed March 8 in Lombardy came late, while the human losses recorded in homes for the elderly raised questions about the management of crisis on the part of health authorities.

March 25, Mattia Maestre, "Patient 1," was discharged from hospital after recovering.

In his office at the Red Cross Center, Luciano Parmigani, head of the emergency department, browses through the log of operations for the year 2020, and points his finger to the beginning of the virus recession, saying, "We were able to fight something that no one knew."