Wreckage of passenger plane falls over residential area in Denver 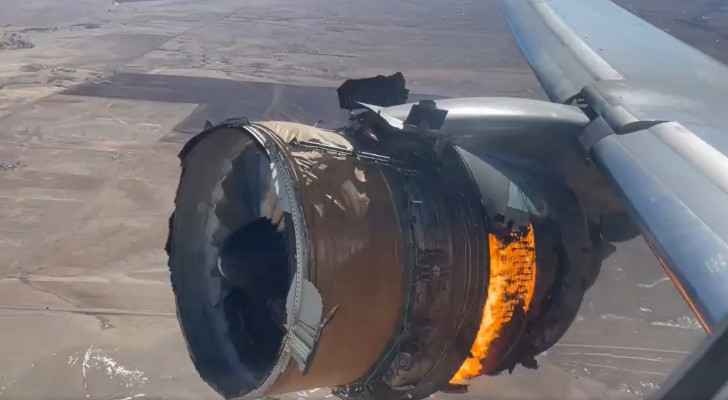 The engine of a United Airlines Boeing airliner caught fire shortly after it took off from Denver Saturday, sending massive debris to a residential area before making an emergency landing.

A video clip filmed from inside the plane, which had 231 passengers and 10 crew members on board, showed the right engine on fire and moving over the wing of the Boeing 777-200, while its hood appeared to be completely missing as the plane flew over an arid area.

The authorities confirmed that there were no casualties on board the plane or among the residents on the ground.

"I can honestly say I thought we were going to die at some point because we started landing right after the explosion," passenger David DeLuchia told the Denver Post.

He continued, "I took my wife's hand and said our life is over."

Delocia said his daughter-in-law posted the video clip filmed by another passenger on Twitter.

United Airlines said in a statement that "Flight UA 328 from Denver to Honolulu suffered an engine failure shortly after its departure and returned safely to Denver and was received by emergency crews as a precaution."

She added that "the majority of the passengers who were originally on board the flight are currently on their way to Honolulu on a new flight," adding that those who did not want to travel immediately were provided with hotel accommodation.

In recording the distress request obtained from Live ATC, which broadcasts air traffic communications, the pilot requested emergency permission to return to Denver.

"We suffer from an engine failure, we need to go back," he said without apparent panic in his tone. He confirmed, after the Watchtower asked him to repeat what he had said, "We need to come back immediately."

Meanwhile, residents of the Denver suburb of Broomfield found large pieces of the plane scattered around their neighborhood, including a giant circular coin in front of the home of a person named Kirby Clements.

"It was a bit confusing," he told CNN. He continued, "I completely landed on my truck and fell," noting that a separate large piece of debris left a hole 1.5 meters deep in the roof of a neighbor.

The Federal Aviation Administration said it was "aware of reports of debris near the plane's flight path," adding that the agency and the National Transportation Safety Board would launch an investigation into the accident.

"If you find a wreck, please don't touch or move it," Bloomfield police wrote on Twitter.

"The National Transportation Safety Board wants all debris to remain in place for investigation," she added.

United Airlines announced that it "will continue to work with federal agencies investigating the accident."

Heather Solar was leading a training session for the girls' soccer team in an amusement park when she heard an explosion followed by falling debris, she recounted.

"Frankly, what I thought at the beginning ... was that we were being bombed," Solar told the Denver Post. "There was a lot of debris in the sky."

JUST IN: Denver International Airport officials tell us United Airlines Flight 328 bound for Honolulu returned to the airport after an engine problem. Neighbors heard a loud boom, took these photos of what look like Boeing 777 engine nacelle in their yards. pic.twitter.com/mklpz3VG4F