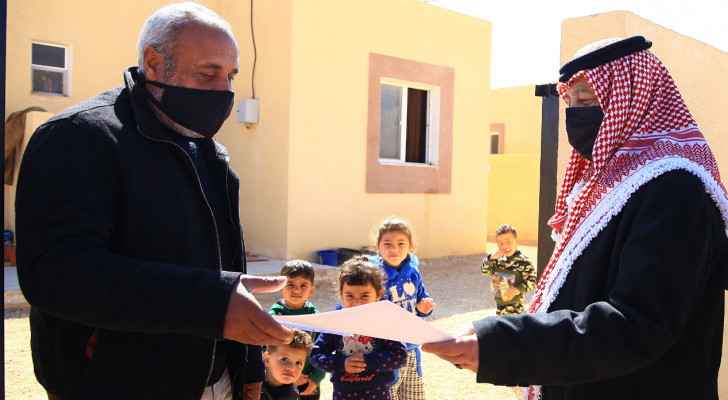 A total of 35 underprivileged families in al-Ruwaished district in Mafraq Saturday received the keys to new homes that were given to them under the Royal Initiative for the housing of poor families across the Kingdom.

The initiative was launched in 2005 upon a directive by His Majesty King Abdullah II to improve the quality of life of families in need. Families are selected based on fair and transparent criteria by the Ministry of Social Development.

The Royal Court Chief and head of the committee to follow up on Implementation Yousef Issawi handed the keys to these families during a ceremony attended by Minister of Water and Irrigation Motasim Saidan and the Governor of Mafraq.

During the tour, Issawi inaugurated the 'Environmental Burqa Lodge,' which was constructed as part of the royal initiatives projects. It is a 10-room building with two meeting halls, one restaurant, kitchen, public facilities and traditional Bedouin tents, with a capacity of 30 people.

The construction of the guest house in the Burqa Reserve was part of a plan to develop ecotourism facilities in nature reserves with the aim of promoting tourism in the eastern desert region and attracting more visitors to the reserves. This will increase the economic and social benefits for the local communities and create job opportunities.

Head of ACC does not expect long ....