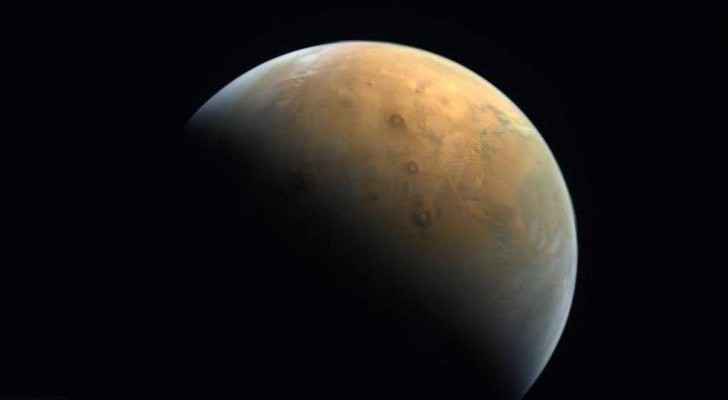 Sunday, the Hope Probe sent the first image of Mars taken by the first Arab space probe, from a height of 25,000 kilometers from the surface of the Red Planet.

The Crown Prince of Abu Dhabi and the Deputy Supreme Commander of the Armed Forces, Sheikh Mohammed bin Zayed Al Nahyan, wrote on Twitter, "The transmission of the Hope Probe's first image of Mars is a defining moment in our history and marks the UAE joining advanced nations involved in space exploration. We hope this mission will lead to new discoveries about Mars which will benefit humanity."

The image shows sunlight falling on the surface of Mars, the north pole of the red planet, and the largest volcanoes of Mars, Olympus Mons, according to AFP.

Feb. 9, 2021, millions in the United Arab Emirates, the Middle East, and the world watched the historic moments of the "probe of hope" entering the Mars' orbit after it traveled 493 million kilometers in space.

Notably, the Hope Probe is the first of three spacecrafts that will reach the red planet this month. The Chinese probe "Tianwen-1" followed it, and the US' probe is expected to arrive soon.

The UAE, China and the US launched missions to Mars in July 2020, taking advantage of a favorable space position to send a new batch of exploration vehicles to the orbit and surface of the red planet.

After setting up the probe in Mars, the UAE, which celebrates its 50th national day this year, has become the fifth country in the world to reach Mars.

The probe uses three scientific instruments to monitor the Martian atmosphere and is expected to begin sending information to Earth in Sept. 2021.

This week, the UAE could become the first Arab country to ....

This week, the UAE could become the first Arab ....

This week, the UAE could become the first Arab ....

This week, the UAE could become the ....