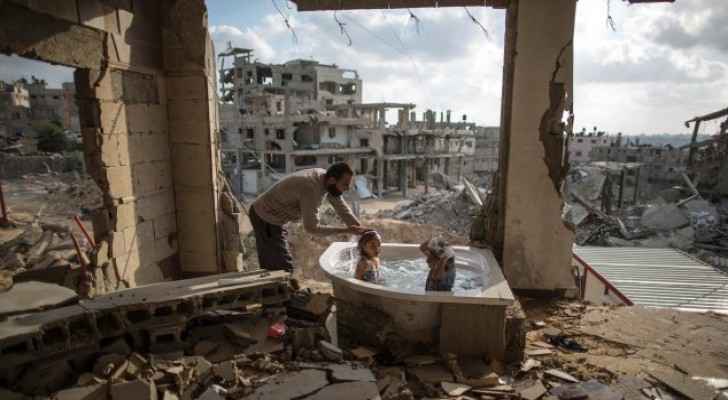 Nevin Barakat lost her husband and was injured along with three of her five children by shrapnel of Israeli Occupation shells that targeted a school affiliated with the United Nations Relief and Works Agency (UNRWA) that was sheltering dozens of displaced families during the Israeli Occupation war on the Gaza Strip in 2014.

Friday's decision by the International Criminal Court, which states that its jurisdiction includes the occupied Palestinian territories, revived the family's hopes for an investigation into this bombing.

The sound of shells and explosions that rocked the school in the northern Gaza Strip on the night of the 30th of July is still echoing in the memory of Nevin, 34, who recounts: "I counted seven shells before I lost consciousness."

She explains how she woke up to the screams of her eldest son to inform her of the death of his father by shrapnel of another shell that fell in the yard of the school where dozens of families had sought shelter under the banner of the United Nations after the Israeli Occupation bombing destroyed their homes or forced them to leave.

Nevin suffered a fracture in her back and paralyzed the lower limbs, while three of her children, ages 5, 10 and 11, sustained varying wounds.

Nevin did not succeed in holding back her tears, saying, "I felt happy and hopeful with the decision of the International Criminal Court and that the world began to feel us and the need to stop the Israeli injustice."

Samar Barakat, 18, Nevin's daughter, who was also injured that day by shrapnel in the leg, said, "Whoever kills should receive his penalty, and Israel must be held accountable for her crimes."

"I was trying to flee with my brothers, but the shells were falling in front and behind us," she added.

"I asked the doctor to allow me to say goodbye to my father while I saw the paramedics carrying him, but he refused to allow me to do so, because his body was just body parts," she said, while tears streaming down her cheeks.

- "Nothing brings back our loss" -

In a document published on April 27, 2015, the UN Security Council blamed the Israeli Occupation army for seven strikes on UN schools in Gaza that were being used as shelters for the residents. These raids resulted in the deaths of 44 people.

According to the document, the Israeli Occupation army bombed two schools belonging to the United Nations in northern Gaza on July 24 and 30, and carried out a missile strike targeting another UN school in the city of Rafah in the southern Gaza Strip on the 3rd of August.

"These buildings (...) are supposed to be safe places, especially during a period of armed conflict," the document states, considering at the same time that it is "unacceptable" for armed groups to use UNRWA schools to store weapons.

The Israeli Occupation army has always emphasized that it has done its utmost to avoid civilian casualties, accusing Hamas and other armed factions of using civilians as "human shields" by conducting their military operations from populated areas.

When the International Criminal Court announced Feb. 5 that its powers include the Palestinian territories, Israeli Occupation Prime Minister Benjamin Netanyahu said that his country has the right to "defend itself against terrorists."

On a seashore west of Gaza City, Montaser Bakr, 17, tells how he escaped death when Israeli Occupation missiles landed seven years ago near him and his cousins.

"I will tell them in the international court that we were playing football when Israel killed my cousin Ismail, 9, while he was on his way to get the ball," he says.

Montaser, who was 11 years old, was wounded, and his brother Zakaria, 9, and his nephew Ahed, 10, in addition to two of his cousins, who were 10 and 11, were killed in Israeli Occupation shelling while they were playing on the Gaza beach.

This caused a shock to public opinion inside and outside Gaza, after the pictures that foreign media correspondents reported directly from their residence in hotels overlooking the beach.

Sayed Bakr, 19, a cousin of Montaser who survived the bombing, said, "Nothing will return our loss, but the right of those who were martyred must not be lost."

His mother, Salwa Bakr, 46, says, "I have been waiting for this moment for seven years, and the leaders of the occupation can be tried for their crimes against us."

The mother, who lost one of her sons in the war, cries and continues while covering her face with her hands, "Those who survived the bombing at that day no longer have a desire for life and suffer from psychological disorders."

Muhammad Abu Jazar, 34, had his leg amputated as a result of the Israeli Occupation bombing of his house in the city of Rafah in the southern Gaza Strip during the 2014 war. His wife, who was 25at the time, and two of his children, who were 1.5 and three years old, were killed.

"We were sleeping. The shelling began indiscriminately over the entire neighborhood, as seven houses were completely destroyed," he told AFP.

In a series of reports published between November 2014 and May 2015, Amnesty International, based in London, said it had documented eight Israeli Occupation strikes on homes in Gaza "without warning," killing at least 104 civilians.

Abu Jazar shows a picture on his phone of his two children, who are placed in a refrigerator designated for cooling ice cream that the paramedics used at the time, after the refrigerators of the dead in hospitals were full.

"I am disappointed, and I am not sure if the ICC decision will lead to anything on the ground," he says.