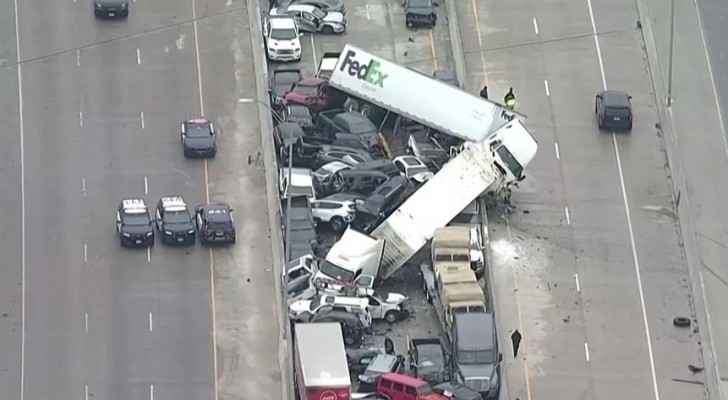 At least six people were killed and dozens injured Thursday in a 130-car pileup on an icy freeway in Texas, according to CNN. Fort Worth Fire Department spokesman Michael Drivdahl said in a news conference the crash was probably caused by icy conditions, reported the AFP.

Professional storm chaser Jason McLaughlin posted the video on Twitter showing the scene showing dozens of mangled cars and trucks. "It's still chaos," McLaughlin told The Weather Channel. "It looks like a couple of vehicles lost control and when that happened, everything just piled up behind them."

The National Weather Service warned of continued freezing rain and sleet in the area, making for ongoing treacherous driving conditions.

Here at the scene in North Fort Worth of one of the worse disasters I have ever seen in this area. Pray. Pray hard. 100+ of vehicles... @CBSDFW @CBSNews @ABC @WeatherNation @weatherchannel @ReedTimmerAccu @FoxNews @cnnbrk pic.twitter.com/HFpeJoRA2Q

One dead, six injured in accident in Ghor al-Safi: PSD

One dead, six injured in accident in Ghor ....

One dead, six injured in accident in Ghor ....

One dead, six injured in accident in ....

Lack of doctors, specialists direct cause of increase in ....