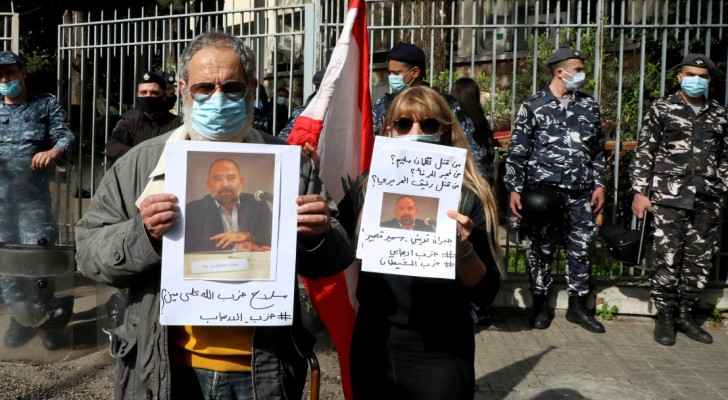 Ambassadors of several countries, most notably the US ambassador, called for an end to the policy of impunity prevailing in Lebanon, during a ceremony honoring the researcher and political activist Luqman Salim in his family’s home in the southern suburb of Beirut.

A week after he was found shot dead in the south of the country, Salim's family organized a ceremony honoring their deceased in the garden of their home in Haret Hreik, where they set up a memorial for him. The ceremony, during which prayers were recited by Muslim and Christian clerics, was attended by a number of Western diplomats and friends in the absence of an official Lebanese representation.

Salim, 58, is a researcher and thinker who worked in the field of defending human rights, documenting the memory of the civil war (1975-1990) and raising awareness of the importance of citizenship and equality in a country suffering from deep political and sectarian divisions and conflicts.

Salim belongs to the Shiite sect, but he is one of the most prominent rejecters of sectarianism. He turned his family’s home in the southern suburbs of Beirut, the stronghold of Hezbollah, into a headquarters for his work and activities, and a center for the United Nations Documentation and Research Association, which he founded.

"You have been robbed and we have all been deprived of a great man. It is a brutal act, unacceptable and unpardonable," said US Ambassador Dorothy Shea, during her participation in the honoring ceremony, on a rare visit by an American diplomat to the southern suburbs, addressing his family.

She added, "He was a person who did not tire and tirelessly in his endeavors for the reconciliation of the Lebanese people and the promotion of freedom," stressing that "these efforts cannot and will not be suppressed by fear and violence."

"We join you in demanding accountability for this horrific crime," she added.

The German ambassador, Andreas Kindle, stressed, during his speech, that "what happened last week should not be forgotten," stressing that "we want and need a transparent investigation and an end to impunity."

She said her country "lost a friend" but would continue to support the projects he worked on.

Several research centers, non-governmental and international organizations have used the expertise and publications of Luqman Slim, due to his independence and daringness in addressing the most sensitive topics. In addition, several Western embassies have provided financial support for projects documenting the Memory of War and Missing Persons.

In a brief speech, Luqman Salim's mother, the Egyptian researcher and journalist, Salma Mershaq, blamed her son’s companions and the youth with the responsibility of "building a country fit for you and Balqman," adding, "The burden is very heavy on you."

"Only use reason and logic," she said. "The weapon is not beneficial for the country and it has not helped me as a mother. My son was lost."

The family, who did not disclose whether they held the burial ceremony, placed a marble plaque in the middle of their garden in memory of Luqman, attached to a verse of al-Mutanabi, in which he said: “I stood, and there is no doubt in death for someone standing as if you were in the eyelid of evil while sleeping."