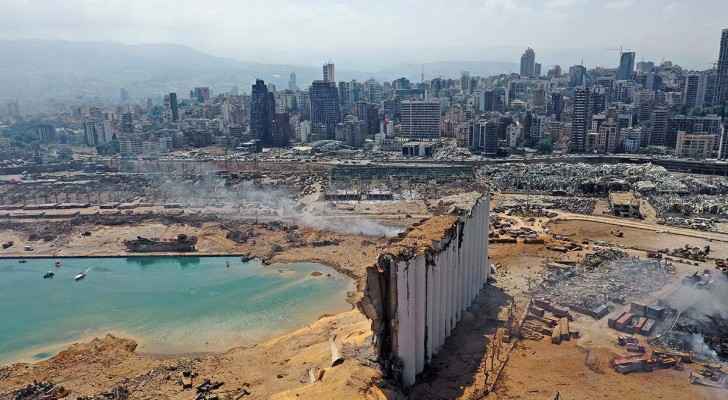 According to a German expert, the Beirut Port explosion was not nearly as deadly as it could have been, given the discovery of other dangerous chemicals stored in it that were recently extracted by a specialized German company.

The storage of huge quantities of ammonium nitrate in the port of Beirut, without any preventive measures, caused a huge explosion Aug. 4, killing more than 200 and injuring more than 6,500 others. It also caused extensive damage to the port and several neighborhoods of the capital.

After dozens of containers containing highly dangerous chemicals were found in the port following the explosion, Lebanon signed in November a contract with the German company "Combi Lift" worth 3.6 million dollars to dispose of them, in the absence of local capabilities or expertise to do so.

The German embassy in Lebanon announced a few days ago that the company had finished processing 52 containers of highly dangerous chemicals that posed a "threat to people in Beirut."

"We found materials that, if mixed with each other, could lead to an explosion," Michael Wintler, the project manager at the company, told France Presse.

"The port is lucky because there was a space between the containers" that contained these materials, he added.

This month, the company’s crew finished processing thousands of liters stored in dilapidated containers that have been in the port for more than a decade, in a complex and dangerous process.

"I have not seen a similar situation in my life," Wintler said, noting that the interaction of some materials caused curvature in containers as a result of their corrosion.

And he spoke of a "sea or a river of yellow and green materials" that leaked from some containers and were interacting in the form of "bubbles."

The containers were spread over seven different locations, most of them in an open space for shipping containers at the opposite end of the site of the explosion six months earlier.

"If the materials distributed at the port ignite, Beirut would be destroyed," the port’s chairman and director general assigned to Bassem Al-Qaisi told AFP on November 19.

While Lebanese authorities are still investigating the circumstances of the ammonium nitrate arrival at Beirut port, and the authorities responsible for storing it, it appears that the reason for storing the chemicals that the German company handled is also unknown.

"It seems that no one from the authorities knows anything about these shipments," except for the date of their arrival, Wintler said.

"I don't think the port authorities are aware of what was at the site."

The huge blast severely damaged containers that were starting to corrode and had holes in them from the reaction of acid after years of neglect.

"It was not possible to lift or move many of the containers because their condition was very poor," Wintler said, so experts had to move the chemicals manually, which exposed them to risks.

He recounted that wearing chemical protective clothing saved him when hydrochloric acid leaked from the bottom of a barrel he was lifting and scattered on the ground. Hydrochloric acid, a toxic and corrosive substance, accounts for sixty percent of the chemicals that Combi Lift has dealt with.

According to Wintler, the company had to handle thousands of liters of highly flammable acetone and containers of hydrogen peroxide, a liquid chemical compound. The two substances, if mixed, could have caused an explosion. However, the presence of the containers in separate locations by chance prevented a disaster, according to Wintler.

The "more dangerous" chemicals that were treated included hydrofluoric acid, which can be fatal if it enters the bloodstream or comes into contact with the skin.

Combi Lift worked to store the materials in special containers in preparation for shipment to Germany, in a procedure expected at the end of this month, after the Lebanese government pays the sum of two million dollars due according to the contract, amid a stifling crisis in the country.