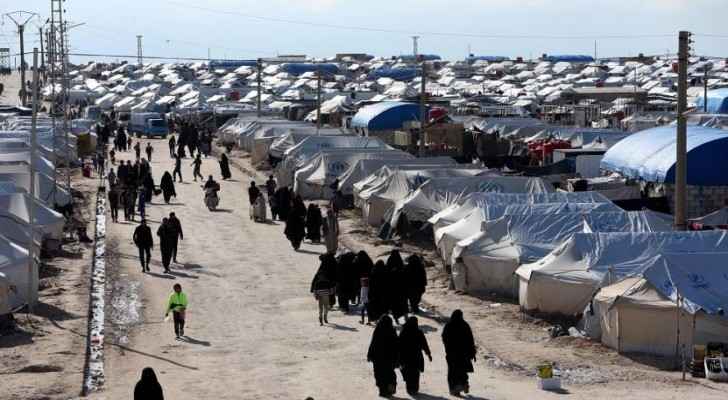 At least 14 people have been killed, three of them by beheading, since the beginning of the year in Al-Hol camp in Syria, which houses tens of thousands of displaced people and family members of Daesh fighters, a Kurdish official told AFP on Monday.

Last month, the United Nations warned of the worsening of the already deteriorating security situation in the Al-Hol camp, which is supervised by the Kurdish Autonomous Administration and includes about 62,000 people, 80 percent of whom are women and children.

"The number of those who have been killed in Al-Hol camp since the beginning of the year so far has reached 14, three of them by cutting their heads" and the rest through "gunshots from silencers," said Sheikmos Ahmed, the official for the displaced and camps in northeastern Syria.

The dead were ten Iraqis and four Syrians, according to Ahmed, who accused the "Daesh cells" of being behind this "in coordination with foreign women" in the camp with the aim of "creating chaos and fear ... and killing the collaborators with the camp administration."

However, a humanitarian worker, who refused to be named, spoke of clan tensions that may be behind some of the crimes in the camp.

In recent months, the camp has witnessed several security incidents, including escape attempts and attacks against guards or humanitarian workers.

Last month, the United Nations reported "12 killings of Syrian and Iraqi residents in the camp" in the first half of January.

"Cases of spreading extremism, training, fund-raising and incitement to carry out external operations in Al-Hol camp have been reported," she said, adding that "some detainees consider Al-Hol camp the last remaining caliphate" that Daesh declared in 2014 over its areas of control in Syria and neighboring Iraq before it was defeated.

The section on foreign women and their children from families of Daesh fighters includes about ten thousand women and children, according to the Security Council Committee, which stated that "some minors are being indoctrinated and prepared to become ISIS operatives in the future."

Escapes take place from time to time, especially in light of a "limited ability" to maintain security and a decrease in the number of guards "from 1500 guards in mid-2019 to 400 guards in late 2020."

The Kurds are calling on the countries concerned to return their citizens or establish an international court to try their militants. However, several European countries, including France, were satisfied with the return of a limited number of orphaned children.

Monday, UN human rights experts urged 57 countries whose nationals are being held by the Kurds to return them to their countries without delay.