This week, the UAE could become the first Arab country to reach Mars 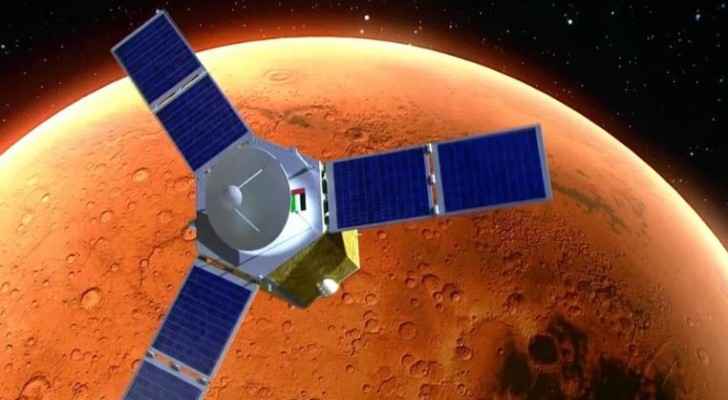 The Emirati "Al-Amal," or Hope, probe, the first Arab exploration flight of its kind, is expected to reach the orbit of Mars Tuesday, making it the first of three missions to reach the red planet this month.

The UAE, China and the United States launched missions to Mars last July, taking advantage of a space positioning conducive to sending a new batch of search mechanisms into orbit or to the surface of the most interesting planet in the solar system.

If the mission succeeds, the wealthy Gulf state, which this year celebrates its 50th birthday, will become the 5th country in the world to reach Mars, while China will become the sixth the next day.

Ahead of the expected date, the UAE lit its landmarks red at night, and government accounts on social media put up a picture of the "Hope" probe, while the Burj Khalifa, the tallest building in the world, was preparing for a huge festive show.

Unlike the other two Mars projects, the Chinese "Taeunwin-1" and the American "Mars 2020," the Emirati probe will not land on the Red Planet, but rather it will orbit around it for a full Martian year, equivalent to 687 days.

Only the United States, India, the former Soviet Union and the European Space Agency have successfully sent missions into the orbit of the Red Planet.

After its successful launch from Japan last July, the mission of the "Hope" probe is facing its "most important and complex" maneuver, according to Emirati officials, with a success rate of 50 percent to enter Mars orbit.

The process of slowing the spacecraft's speed to the point that it can be inserted into Mars' gravitational orbit will be very precise, and it will start Tuesday evening at 19:30 local time (1530 GMT).

The probe will rotate to the extent that it is allowed to be inserted into the capture orbit, and the fuel-burning process continues using six reverse-drive motors for 27 minutes to automatically reduce its speed from 121 thousand kilometers to 18 thousand kilometers per hour.

This complex process will consume half the fuel on the probe, with 11 minutes for a signal from the "Hope" probe to reach Earth.

Imran Sharaf, director of the Emirates Mars Exploration Project, said it was "a great honor" that the UAE was the first to reach the Red Planet this year.

"We feel humbled that we are in such a partnership (...), this was never a race for us, as we deal with space as an effort and cooperation," he added.

While the mission's goal is to provide a comprehensive picture of the weather dynamics in the planet's atmosphere and pave the way for scientific breakthroughs, the probe is part of a larger goal of building a human settlement on Mars within a hundred years.

This is the first mission of its kind in the Arab world, and it was designed as a source of inspiration for the young generation in a region often experiencing conflict and economic crises.

The probe uses three scientific means to monitor the Martian atmosphere and is expected to begin sending information to Earth in September 2021.

Burj Khalifa lit up with image of New Zealand Prime ....

Burj Khalifa lit up with image of New ....