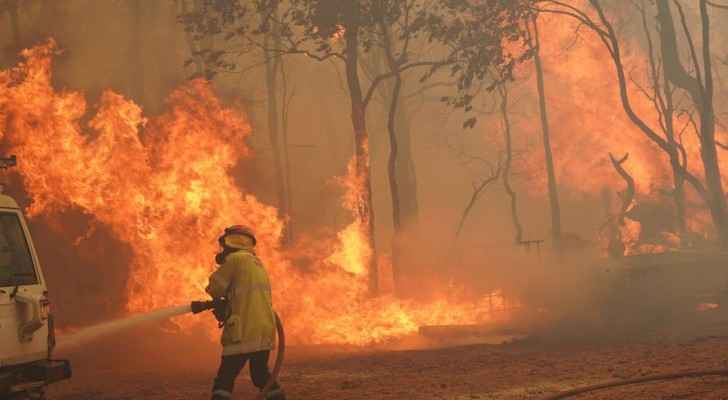 Forest fires have spun out of control in Perth, the fourth largest city in Australia, destroying 71 homes, according to what the authorities announced Wednesday.

The fire engulfed large areas of land in Perth Heights, and was heading towards more populated areas.

Six firefighters were slightly injured, including one who officials said had suffered burns and continued to work to extinguish the flames. However, there were no reports of deaths or serious injuries so far.

"Losing people their homes is really painful. We sympathize with them," said fire chief Darren Clem of Western Australia.

Several warnings were issued amid expectations the situation would deteriorate later on Wednesday due to the winds.

The fires come as residents were forced to lockdown after a coronavirus case was detected in the city. The lockdown measures imposed on Sunday include nearly two million people in and around Perth.

"This is a situation we have never seen before," said Western Australian Prime Minister Mark McGowan.

"A general lockdown and raging forest fires, it is scary and it will test for all of us," he added.

No new COVID-19 cases have been reported since the lockdown began.

As the fires approached populated areas, Klim called on local residents to move quickly and leave their homes despite the restrictions.

"What we do not want is hesitation among the residents about whether they should leave their homes when we ask them to do so," he said.

"Therefore, the evacuation orders overshadow all quarantine requirements," he added.

Hundreds of people have fled the area since the fires began on Monday, and many are spending the night in evacuation centers.

The fires have so far covered about 10,000 hectares of land.

The temperature is expected to reach 35 degrees Celsius Wednesday before the arrival of an expected tropical cyclone, which may cause rain and lower temperatures.

More than 3.5 million hectares of land were burned in Western Australia during the devastating fires in 2019-2020 due to climate change.