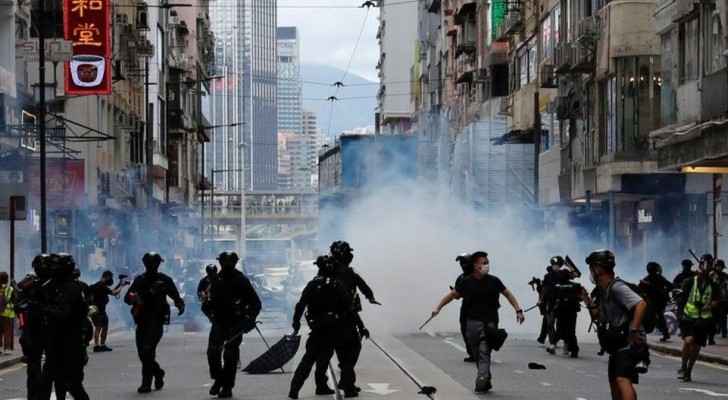 Starting Sunday, millions of Hong Kong citizens will be able to apply to obtain new visas that allow them to stay longer in Britain and then apply for naturalization through a new policy implemented to allow Hong Kong nationals to escape Chinese oppression.

Starting Sunday afternoon, anyone holding a UK overseas passport will be able to apply online for a visa that will allow them to live and work in the UK for five years. After that, they can apply for citizenship.

Before that, they could visit Britain and stay there for six months but without the right to work.

This British immigration plan comes in response to Beijing's decision last year to impose a comprehensive national security law on the semi-autonomous region, to silence large and sometimes violent protests calling for democracy, after the massive popular demonstrations that took place in 2019.

Britain accused China of failing to fulfill a promise it made before returning the region to it in 1997 that this financial center would preserve basic freedoms and independence for a period of fifty years. London stressed its moral imperative to come to the aid of its former colony.

"We respect our deep, historic and cordial connections with the people of Hong Kong and defend freedoms and independence," Prime Minister Boris Johnson said in a statement this week.

The decision angered China, which announced Friday that it would stop recognizing a British overseas passport from Sunday. Beijing's decision is symbolic because Hong Kong residents often use their local identities to leave it.

But Beijing stressed that it "reserves the right to take additional steps," raising fears that it seeks to prevent residents of the region from leaving.

The number of those who will apply under the British plan is unknown, especially with the spread of the COVID-19 pandemic and the restrictions imposed on travel.

But about seventy percent of Hong Kong's 7.5 million people can apply for this visa because they have an "overseas passport" or "BN (O)" (British National - Overseas).

The number of requests to obtain these passports has increased by more than 300 percent since the implementation of the National Security Law last July, reaching 733,000 people until mid-January.

Britain expects about 154,000 Hong Kong citizens to arrive on its soil next year, and about 322,000 within five years.

When Hong Kong was returned to China, many residents of the region were asking for full citizenship from London, but Beijing strongly objected. The overseas passport was a settlement for residents of the former colony born before 1997.

Today, it is considered one of the last means of exit for Hong Kong citizens wanting to rebuild their lives elsewhere, while the repression intensifies in the region.

Stella, who previously worked in the field of marketing, plans to move to Britain very soon with her husband and their three-month-old baby.

She told France Press, refusing to mention her family name, that "the National Security Act of 2020 has put enough weight because its provisions mean criminalizing freedom of expression."

One of the conditions for obtaining a new visa is proof of having enough money to live for at least six months.

Hong Kong citizens who have settled in Britain and help those wishing to immigrate say that many of the people applying are middle class and have enough savings to go to the UK.

"Most of those we talked to are families with children in primary school or kindergarten," said an activist in Line Rock Hill UK, which bears the name of one of the most famous mountains in Hong Kong.

"There is no doubt that the Overseas Passport is a lifeboat," Mike, a scientist who recently arrived with his family in Manchester, told AFP. He added that many Hong Kong residents were worried about China trying to prevent them from fleeing, "so we had to leave as soon as possible."

Hong Kong residents can only use British overseas passports upon their arrival in Britain or any other country that recognizes the document.