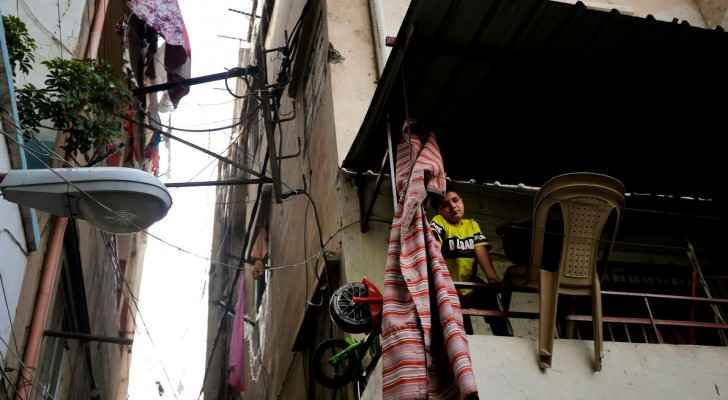 Despite recording an unprecedented jump in COVID-19 cases and imposing a tight lockdown, Omar Karhani continues to open his modest store to sell vegetables in northern Lebanon in order to secure his family's sustenance, he says, stressing that poverty scares him far more than the pandemic.

For about two weeks, Lebanon has been witnessing a general tight lockdown, with a round-the-clock curfew that is among the most stringent in the world, but poverty, exacerbated by a prolonged economic crisis, pushes many to not comply in order to preserve their livelihood.

"I am not afraid of Corona, but I am scared of need and poverty," said Qarhani, 38, a father of six residing in the Zahiriya district of Tripoli, told AFP with emotion.

"I am scared that my children will get sick and I cannot find medicine for them in pharmacies," he added, which has been suffering for weeks from a number of medications being cut off.

While waiting for customers, Karhani inspects a few boxes of vegetables that he displays in his shop, which he opened months ago after working in a flower shop. "We need more than 70,000 Lebanese pounds ($8 according to the black market exchange rate) every day to secure our food, while my work does not provide half of this amount," he says.

The authorities are strictly enforcing the general lockdown, which began on the 14th of this month and continues until the eighth of February. The closure excludes vital and health facilities, ovens and delivery service in foodstuff stores. Since the beginning of the year, Lebanon has recorded record infection and death rates, with most of the country's hospitals reaching their maximum capacity.

The number of infections since the start of the virus outbreak has reached more than 282,000, including 2,404 deaths. Lebanon has a population of nearly six million.

Every day, the security forces write thousands of arrest reports against those who violate the procedures. However, this does not prevent many people, especially in poor neighborhoods and popular areas, from going out to practice their work, especially in Tripoli, where more than half of the population has been living for years at or below the poverty line, according to the United Nations. The rate is likely to have risen on the impact of the economic meltdown.

For the second day in a row, protest movements took place in Tripoli on Tuesday evening, with angry youths emerging, rejecting the general closure. An AFP correspondent reported that groups of dozens were dispersed throughout the city, some of whom tried to storm the Saraya. Masked men threw Molotov cocktails and fireworks at security forces in an attempt to spark the riot.

The official National Media Agency said at a later time that the clashes resulted in 30 wounded among the demonstrators and the security forces, adding that the Red Cross transported six wounded to hospitals.

Abdullah Al-Bahr, 39, a father of three, angrily told France Presse, "I cannot bring a bag of bread to the house ... We will die either from hunger or from Corona."

Protests that developed into confrontations with the security forces on Monday night resulted in the injury of more than thirty people, most of them lightly. Protesters, some of whom did not even wear a muzzle, burned tires in the middle of the streets, and threw stones at the security forces, and the security forces responded with tear gas and rubber bullets.

Muhammad al-Beiruti, 65, an activist in the committees that monitor the affairs of the poor in Tripoli, explains to France Press that “most of those who do not abide by the closure decision are daily-workers, meaning that on the day they are not working they do not eat.”

And he warns that "the living situation is on the verge of an explosion of people, and what happened at night is only a prelude."

The increasing spread of the epidemic exacerbated the repercussions of an economic collapse in Lebanon that began more than a year ago. And now more than half of the population in Lebanon live below the poverty line and almost a quarter of them in extreme poverty, according to the United Nations.

The Ministry of Labor estimates that daily-workers make up about 50 percent of the Lebanese workforce. They do not benefit from any social or health advances.

Save the Children expressed its "deep" concern over the repercussions of the total closure on families and children who are mainly suffering from fragile economic conditions, unless they are supported immediately.

The director of the organization in Lebanon, Jennifer Morhad, spoke in a statement in the middle of this month, about a "very bleak reality", noting that "survival has become a daily task for millions of children and their families" in Lebanon.

Al-Najjar Ismail Asaad, 43, a father of seven children, the oldest of whom is 19, describes the situation as "tragic."

He says that he has been staying at his home in the village of Ain al-Dahab in the Akkar region in the far north for two weeks due to the closure, adding, "Before the closure, work was light, but now we can no longer work at all, what does someone who does not receive a monthly salary do?"

In Broumana, the mountainous region overlooking Beirut, George has not received any call for his services in the field of electricity for about two weeks.

"I think daily," How can I avoid paying costs or bills ... The prices are merciless, "he says.

George stresses that he does not oppose the closure decision to curb the spread of the epidemic that has exhausted the medical sector. But he asks, "How can the state take a similar decision without providing any material assistance" to support families, as is the case in many countries.

According to the Ministry of Social Affairs, the authorities provide material aid of 400,000 Lebanese pounds ($ 50) per month to about 230,000 families, which is very low and not sufficient to secure basic needs.

The Minister of Tourism and Social Affairs in the caretaker government, Ramzi al-Musharrafieh, told Al-Jadid TV on Tuesday that only 25 percent of the Lebanese do not need help.

The repercussions of the tight lockdown also affect hundreds of thousands of Syrian refugees, who mainly live in difficult conditions.

Among them is Abdel Aziz, 35, a paint worker who lives with his family in the Ashrafieh area in eastern Beirut. He says sadly, "I have not received a thousand pounds since the closure began."

The young man, who was displaced from northern Syria in 2014, added, "We fled from Raqqa when ISIS entered our areas and our homes were destroyed ... it seems that we have escaped death there and will starve here."