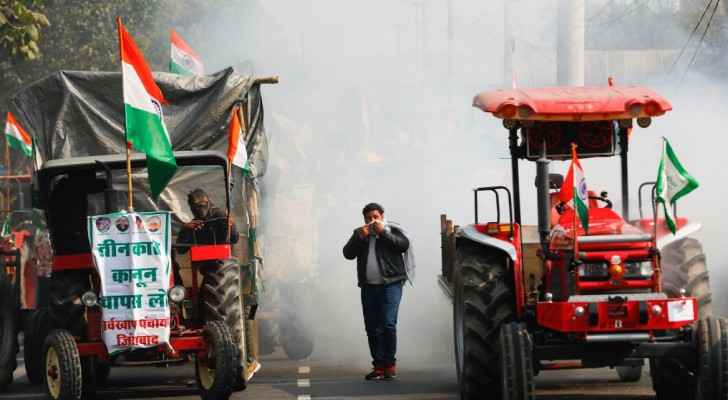 These acts of violence constitute a major escalation in the confrontation between the government and the thousands of farmers who have camped on the outskirts of the city since late November.

The farmers, most of whom are from northern Indian states, including Punjab, want to cancel new agricultural reforms that they fear will put them at the mercy of big companies.

On Tuesday, during the annual parade on the occasion of the Republic Day, convoys of farmers on tractors broke down barriers to the city center.

A farmer was killed in what police said was an accident after his tractor capsized after hitting a barrier, while an official statement said at least 86 policemen were injured.

Across the city, clashes took place between security forces and these demonstrators. Farmers attacked policemen with tree branches and metal rods and hijacked buses used to block the advance of their convoys.

In the historic Red Fort, farmers broke through police lines and placed their own emblem on the flagpole amid chants before security forces dispersed them at the site.

On one of the main roads, the residents of Ouaroda threw on tractor convoys. Elsewhere, residents chanted greetings and applauded as farmers passed by, waving Indian flags and blowing trumpets.

As night fell, authorities cut internet and phone lines in areas on the outskirts of Delhi where farmers set up tents.