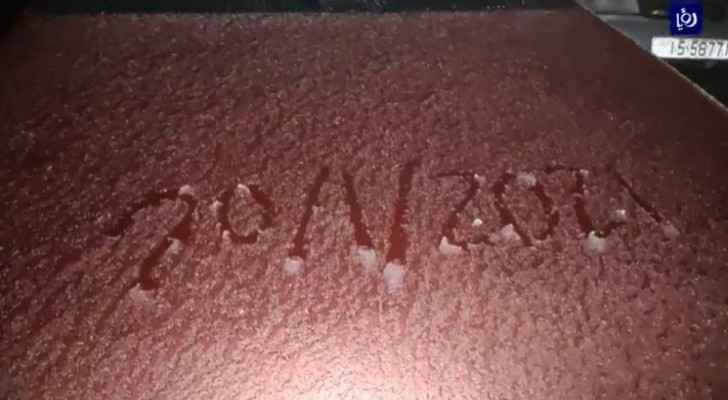 Wednesday, snow began to fall in several areas in the Kingdom including Tafilah, Karak and Mafraq

According to ArabiaWeather, satellite images and meteorological stations indicated that the flow of polar winds accompanying the polar front air depression is beginning, as the chances of snowfall and accumulation of snow over the high mountain heights increase.

The chances of snowfall and accumulation will be especially prevalent in the mountainous heights which elevate over 1,200 meters above sea level which include the regions of Souf, Ras Munif, the northern and southern heights of Al-Mazar, Mu’tah in Karak, Al-Rashadiya, and Al-Qadisiyah in Tafilah.

There is a high possibility that the snowfall will extend in the next few hours to heights less than 1,200 meters, with limited accumulation opportunities if they occur. The regions where this may happen include mountainous heights in Amman and Balqa.

Snowfall and snow accumulation is expected to gradually extend to the heights of Al-Shobak, Al-Hisha, the mountains of Wadi Musa, and the villages of Al-Naimat and Ras Al-Naqab in Ma'an.

Wednesday, the weather is cold in most regions and very cold over the high mountain heights, and often cloudy with rain. Most regions in Jordan will witness rain showers at intervals with chances of thunder, hail and frost.

It is expected that the polar winds will continue to flow towards the Kingdom, causing Jordan to be affected by a wave of ice, frost and a temperature drop to zero degrees.

Where there is a sharp drop in temperatures, and the weather turns to become extremely cold in many regions, the opportunity remains ready for showers of snow over the high mountain heights, especially the southern ones in the early hours of the night, and later during the night in a gradual manner, a large-scale icey frost wave is expected in many parts of the Kingdom.