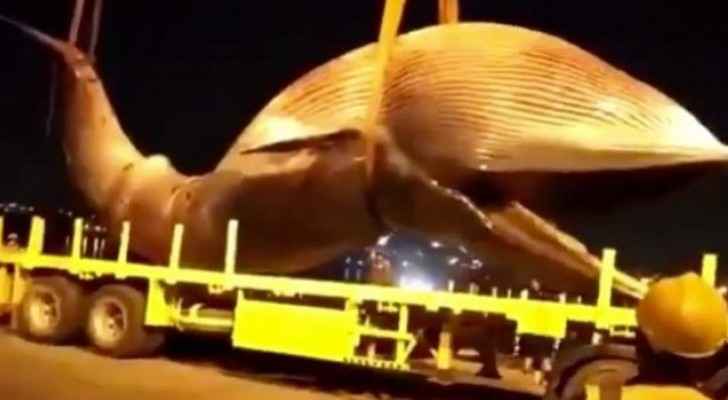 Sunday, the Kuwaiti authorities announced that they had recovered a deceased whale which was about 35 feet long, and weighing no less than 10 tons, after receiving a report that the deceased mammal was in the Heshan area near the Sheikh Jaber Al-Ahmad Bridge.

After its recovery, the Environment Public Authority, the Ports Corporation and the Public Authority for Agriculture and Municipalities, in cooperation with the Kuwaiti Coast Guard operations, withdrew the whale and transported it by truck in order to effectively deal with the body.

According to the Kuwaiti News Agency, the relevant authorities made efforts with the Coast Guard operations to withdraw the deceased whale, which was withdrawn from Marina (19A) with the help of operations teams and divers. The whale was tied and lifted with cranes.

Environmental consultant Ali Khuraibet said that the phenomenon of whale deaths is not new and according to studies, there are about 2,000 whales which die annually, pointing out that their deaths may be due to a number of hypotheses. Scientific studies developed by researchers in this regard, announced that whales usually die at sea and are washed away by the water currents to the coast, or they enter shallow areas in search of food and become stuck as it is difficult to leave these areas due to their heavy weight.

Khuraibet indicated that one of the hypotheses for this particular whale was that he was sick with a specific infection or had an issue with the blowhole. The blowhole is responsible for ventilation and breathing. When whales enter shallow areas, proper ventilation is difficult. The whale may have come to a shallow area due to a lack of food, which prompted this whale to head towards the coasts due to their abundance in other marine creatures.

Additionally, he explained that large marine weapons can mislead whales and lose their way and thus enter coastal areas without realizing.
Unfortunately for many whales, dolphins and other marine life, the use of underwater sonar (short for sound navigation and ranging), or military weapons can lead to injury and even death. Sonar systems, which were first developed by the US Navy to detect enemy submarines, generate slow-rolling sound waves topping out at around 235 decibels; the world’s loudest rock bands top out at only 130. These sound waves can travel for hundreds of miles under water, and can retain an intensity of 140 decibels as far as 300 miles from their source.

These rolling walls of noise are no doubt too much for some marine wildlife. While little is known about any direct physiological effects of sonar waves on marine species, evidence shows that whales will swim hundreds of miles, rapidly change their depth (sometimes leading to bleeding from the eyes and ears), and even beach themselves to get away from the sounds of sonar.

We stand with Jordan, support actions of King Abullah II: ....

We stand with Jordan, support actions ....