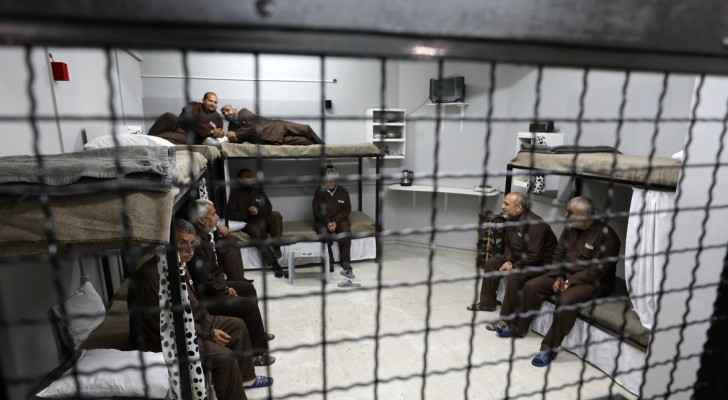 Saturday, the National Committee for Jordanian Prisoners and Missing Persons in Israeli Prisons reported that two Jordanians held in Israeli Occupation prisons have been infected with coronavirus.

According to Abdel Nasser Farwana, a Palestinian human rights lawyer, 21 Jordanians are currently serving time in several Israeli Occupation prisons, along with nearly 5,000 Palestinians. Some of the men are Jordanian nationals, while others are Palestinian/Jordanian.

Two are being held in administrative detention, a controversial albeit common practice in the Israeli Occupation wherein suspects are held without charge for a period up to six months, which can then be renewed.

Barghouti, a former Hamas military leader who has been held since March 5, 2003, is serving 67 life sentences, the highest sentence among any prisoner within the Israeli Occupation.

-Coronavirus in the Israeli Occupation-

Having already vaccinated over 20 percent of its 9 million person population, the Israeli Occupation has been globally recognized as the ‘leader’ of the vaccine race. However, much of its success has been overshadowed by allegations of ‘medical apartheid’ and other inequities, as the Israeli Occupation has refused to vaccinate Palestinians in the West Bank or Gaza - which have recently seen a sharp uptick in COVID-19 cases and deaths - despite calls from human rights organizations that they are legally obligated to do so.

“Israel’s COVID-19 vaccine program highlights the institutionalized discrimination that defines the Israeli government’s policy towards Palestinians. While Israel celebrates a record-setting vaccination drive, millions of Palestinians living under Israeli control in the West Bank and the Gaza Strip will receive no vaccine or have to wait much longer – there could hardly be a better illustration of how Israeli lives are valued above Palestinian ones,” said Saleh Hijazi, Deputy Regional Director for the Middle East and North Africa at Amnesty International in a January report.

In December, the Director General of the Office of the Palestinian Minister of Health Dr. Ali Abed Rabbo exclusively told Roya that the Israeli Occupation’s refusal to vaccinate Palestinians was, “One more example of the Israelis violating their responsibility.”

As of Jan. 17, the Palestinian Ministry of Health has approved Russia’s Sputnik V vaccine for use, as well as the AstraZeneca-Oxford University vaccine, but still has not yet set a date to begin inoculations.

Until last week, the choice to not vaccinate Palestinians included those held in Israeli Occupation prisons, a decision that also saw heavy outcry from several civil liberties groups.

However, the Israeli minister of health announced Thursday that the country would provide vaccinations for Palestinian- and, presumably, Jordanian- prisoners, after the Israeli president said not doing so would contradict the Israeli Occupation’s ‘democratic’ ideals.

'Black water that leaked into Dead Sea is clay soil and ....