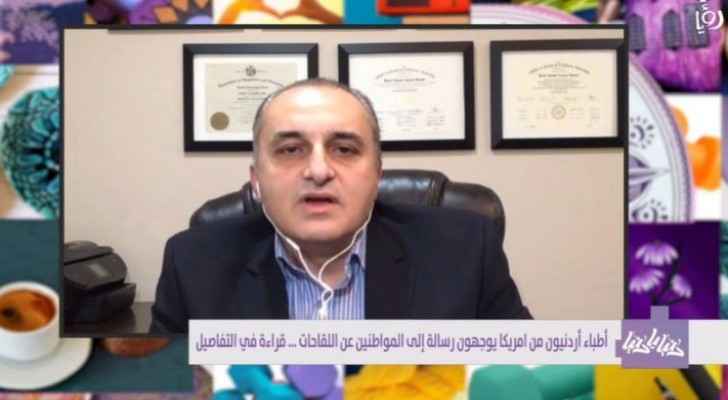 Saturday, a Pulmonologist at the Aurora Sinai Medical Center in Milwaukee, Wisconsin, Raed Hamed stated during his participation in Roya’s ‘Donya Ya Donya’ program, that the COVID-19 vaccine only protects individuals from severe coronavirus infections which lead to severe symptoms that pose a threat to the individual’s life.

Hamed expected that the dangers posed by this virus would end by the end of 2021, after a high percentage of people worldwide had received the vaccine.

He gave advice to Jordanians to take the vaccine, regardless of the rumors which are heard.

This ‘fear’ and rumors related to the vaccines exists in most countries of the world, including theUSA, said Hamed, adding that the vaccine is the only guarantee to contain the virus and reduce its risks to humans.

He also advised Jordanians to continue adhering to public safety requirements, as the decline in the number of deaths and injuries does not mean that the pandemic has ended or vanished. If there is non-compliance, the pandemic will return in a fierce manner within a period of six to eight weeks.

The Jordanian Doctors Association in the USA prepared a video in Arabic aimed at Jordanians, in which more than 10 doctors spoke about receiving the vaccine, to encourage Jordanians to take the vaccine.

Hamed said that he personally received the two doses of the Pfizer-BioNTech vaccine, and he has yet to show any symptoms, except for pain at the injection site, which lasted merely hours before disappearing.

He also stressed that individuals need not be concerned with the vaccine manufacturing of the Pfizer-BioNTech vaccine, which is done through a method called RNA technology. Hamed added that the vaccine is “modern”, and will guarantee no symptoms in the long run. “The technology is not new, rather it has been used for cancer treatments for 15 years,” he said.

Symptoms of vaccines appear during the first weeks after taking them, and throughout history, no symptoms of any vaccine appeared in the long run, therefore all coronavirus vaccines are safe, Hamed said.

The current pandemic is not the worst seen by humankind, Hamed said, adding that the Spanish flu pandemic which occurred between 1918 and 1920 claimed between 50 to 100 million people, and the black plague in the 17th century killed half of the population of Europe.

Hamed claimed that two factors played a role in the widespread belief that the current pandemic is the largest; the first factor being the enhanced forms of communication that is available worldwide such as social media, and the second factor is the enhanced forms of transportation and travel, which allowed the virus to spread rapidly, and reach all countries of the world within a few months.

Viruses in past pandemics used to take a long time to spread, and news took a long time to reach areas far from the location of the epidemic, explained Hamed.