His Majesty holds meetings to discuss Jordanian affairs and developments

His Majesty holds meetings to discuss Jordanian affairs and developments 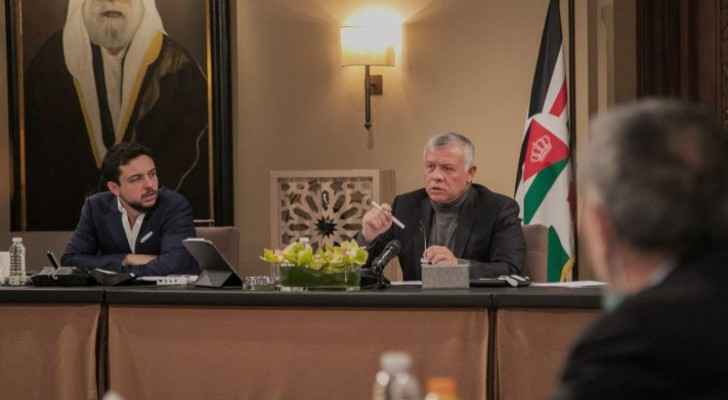 His Majesty King Abdullah II, in the presence of His Highness Prince Hussein bin Abdullah II, Crown Prince, Wednesday, met several prominent individuals from different sectors, within the framework of His Majesty's continuous meetings with the figures of the nation.

The meeting, which was held at Al Husseiniya Palace, dealt with the most prominent issues of local affairs and developments on the regional and international arenas.

His Majesty the King welcomed ideas or proposals that would contribute to planning for the future of Jordan, which celebrates the country's centenary this year, in order to continue to promote the process of positive and successful development.

His Majesty pointed to the improvement of the health situation in the Kingdom, noting that there are government measures to open schools and a number of different sectors, which require the necessity of everyone continuing to adhere to public safety measures to avoid another spike in infections.

On the regional and global levels, His Majesty stressed that Jordan has strong relations on Arab and international countries.

The King reaffirmed Jordan's firm and clear position on the Palestinian cause, and expressed the nation’s full support for the Palestinian ‘brothers and sisters’ in obtaining their just and legitimate rights.

The attendees touched on a number of political, economic, academic, health and social issues, stressing the importance of building on the achievement that the Jordanian state has accomplished over one hundred years. They pointed out the need to follow up on national plans and strategies, and measure their implementation.

The meeting was attended by the Chief of the Royal Hashemite Court and the Advisor to His Majesty for Policies.