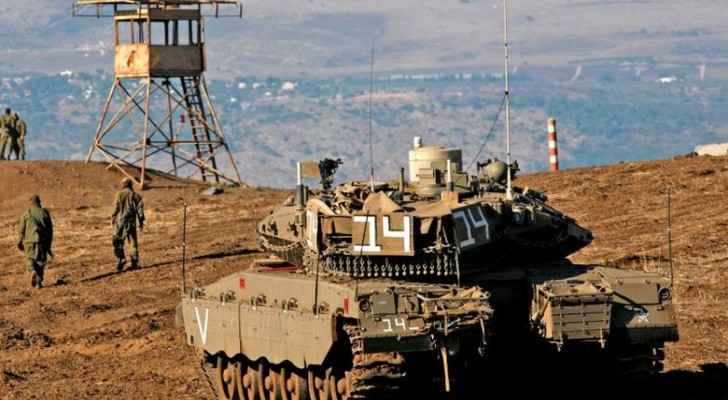 In recent months, the Israeli Occupation has intensified its targeting of military and other sites for Iranian forces and groups loyal to it in several areas in Syria, coinciding with its assertion of its intention to "strike at the Iranian position in Syria."

The Syrian Observatory for Human Rights reported an intense Israeli Occupation bombardment shortly after midnight Wednesday in  the area extending from the city of Al-Zour to the Syrian-Iraqi border in the Albu Kamal desert.

According to the Observatory, the bombing affected warehouses and a camp on the outskirts of Deir Ezzor, sites and weapons depots in the Albu Kamal desert, and others in the Al-Mayadeen desert, belonging to each of the regime forces, the Lebanese Hezbollah, Iranian forces and groups loyal to them.

The official Syrian News Agency "SANA" quoted a military source as saying that "at exactly one o'clock ten minutes (23.10 GMT) today, the Israeli enemy carried out an air aggression against the city of Deir Ezzor and the Albukamal area, and the results of the aggression are currently being verified." Without any additional details.

There was no official comment from the Israeli Occupation side about the strikes.

"These are the most violent strikes carried out by Israel on the Deir Ezzor governorate in nearly two years, and the death toll is the highest since June 2018," when Israeli raids killed 55 people, including 16 regime forces, director of the observatory Rami Abdel-Rahman told AFP.

According to Abd al-Rahman, the Israeli Occupation strikes came days after the Iranian-backed "Fatemiyoun Brigade" brought in four trucks loaded with Iranian weapons from the Iraqi side, the loads of which were unloaded in warehouses at the targeted sites.

In separate air strikes Tuesday, 12 fighters loyal to Iran were killed and 15 others were wounded in the Albu Kamal desert, according to what the observatory counted Wednesday, without being able to identify the aircraft that launched them.

It is difficult to ascertain the identity of the planes when the Syrian official media does not confirm them and the Israeli Occupation refuses to comment on them.

The Israeli Occupation rarely confirms the implementation of these strikes, but it will repeat that it will continue to oppose what it describes as Iran's attempts to establish its military presence in Syria.

In a rare move, the Israeli Occupation army said two weeks ago in its annual report that during the year 2020 it had bombed about 50 targets in Syria, without providing details of the targets that were bombed.

Israeli Occupation army spokesman Avichai Adraei said Nov. 18, the day after the Israeli Occupation announced that it had bombed “military targets of the Iranian Quds Force and the Syrian army” in southern Syria, that his country “will continue to move according to the need to strike the Iranian position in Syria, which poses a threat to regional stability."

The Israeli Occupation has repeatedly pledged to continue its operations in Syria until Iran withdraws from it. Prime Minister Benjamin Netanyahu reiterated his intention "absolutely to prevent Iran from establishing its military presence at our immediate borders."

Analysts are expressing concern that US President Donald Trump, with his ally the Israeli Occupation, may resort to redoubling pressure on Iran and its regional allies in the last 10 days of his presidency.

Syria has been witnessing a bloody conflict since 2011, which has killed more than 380,000 people, caused massive damage to the infrastructure, and led to the displacement of millions of people inside and outside the country.