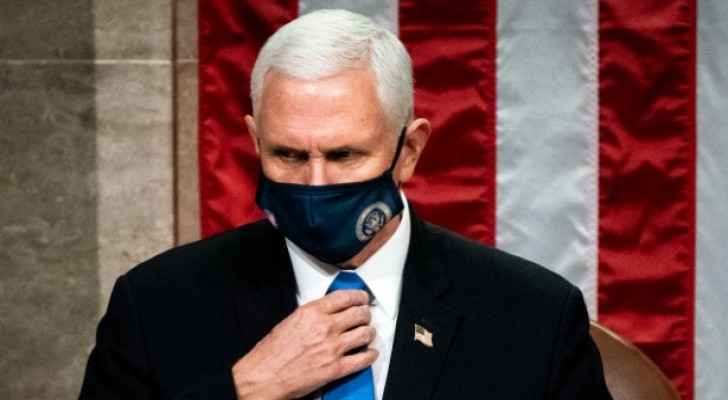 Outgoing US Vice President Mike Pence intends to attend the inauguration ceremony of President-elect Joe Biden, according to several media reports Saturday, while current President Donald Trump, who has increasingly isolated himself in the last two weeks of his term, will be absent from it.

Relations between Pence and Trump have deteriorated dramatically since the vice president Thursday endorsed Biden's victory in the November election during a special session of both houses of Congress overnight after a day of shocking violence in Washington.

Trump supporters stormed the Capitol and broke off the session, in an unprecedented event in Washington that caused a major shock in the United States and the world.

Five people, including a policeman, were killed during the violence that he accused the outgoing Republican president of instigating through his statements.

Saturday, the media quoted a number of senior government officials as saying that Pence, who was transferred to a safe place during the congressional raid while a number of demonstrators were searching for him, decided to attend Biden's inauguration Jan. 20.

Biden announced Friday that Pence was "welcome" at the swearing-in ceremony, while it was considered "good" for Trump to announce that he would not attend the ceremony in a final tweet before Twitter shut down his account.

The ceremony is scheduled to be limited due to the pandemic.

Monday, Trump faces the second impeachment mechanism in his term in an unprecedented event in American history.

A text aimed at launching impeachment measures drafted by Democratic representatives includes an accusation that Trump "intentionally made statements" that encouraged his supporters to storm the Congress headquarters.

House Speaker Nancy Pelosi has vowed to act if the president does not resign.

Democratic leaders urged Mike Pence to activate the 25th constitutional amendment and to declare Trump unfit to exercise his duties.

Although Pence avoided making a public position on this issue, the New York Times reported Thursday, according to a close associate of him, that he does not support this measure for fear that it would lead to an escalation of tension.

Trump to leave Washington hours before ....