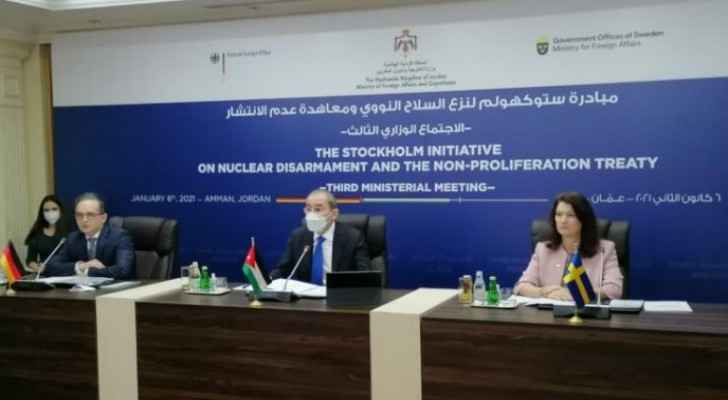 Wednesday, Minister of Foreign Affairs and Expatriates Ayman Safadi stressed the need to build a Middle Eastern region free of weapons of mass destruction by finding a solution to end the tension with Iran over the nuclear armament.

"We in Jordan stress the need to resolve the tension with Iran in all its aspects... The region is full of conflicts and does not need new conflicts, and therefore we support launching a dialogue to resolve the tension with Iran regarding the nuclear aspect," Safadi said in a press conference after the end of the Third Ministerial Meeting of the Stockholm Initiative for Nuclear Disarmament and the Non-Proliferation Treaty.

Safadi said that in order to reach a permanent solution regarding the tension with Iran, “We must also deal with other issues related to Iranian interference in Arab affairs,” adding that the entire Arab world looks forward to having good relations with Iran. However, he said that in order to reach that, we should have an open, practical and transparent dialogue that addresses all the issues that caused this tension.

The meeting highlighted regional developments and efforts to resolve conflicts to achieve peace and stability and meet people's aspirations in the region for growth and prosperity.

Khamenei bans coronavirus vaccines from UK and US