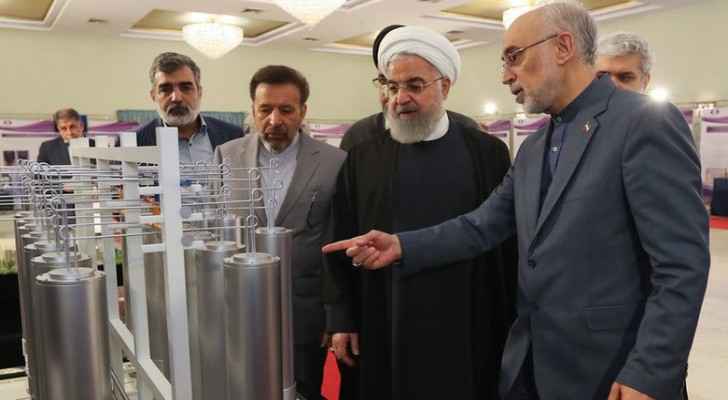 The European Union said that Iran's announcement Monday of 20 percent uranium enrichment is a "major violation" of the Vienna nuclear agreement, which will have "dangerous consequences for the non-proliferation" of nuclear weapons.

European Commission spokesperson Peter Stano said during a daily press conference that Brussels is waiting for a briefing from the director of the International Atomic Energy Agency during the day before deciding on any possible move. The Agency has not yet confirmed the start of the implementation of what Tehran has announced regarding enrichment.

Earlier, a spokesman for the Iranian government, Ali Rabiei, said that the Shahid Ali Mohammadi, or Fordo, facility had begun a "production process" of 20 percent enriched uranium.

This would be well above the ceiling of 3.67 percent specified in the agreement known as the Joint Comprehensive Plan of Action.

"If this announcement is to be implemented ... it would be a major departure from Iran's nuclear commitments under the JCPOA," Stano told reporters.

This would have "grave implications for nuclear non-proliferation."

Under the agreement, Iran agreed to reduce its nuclear program to levels far below the ability to manufacture atomic bombs in exchange for easing sanctions from international signatories to the agreement.

The United States withdrew from the agreement, but the European Union and the other signatories - France, Britain, Germany, Russia and China - kept it alive.

A spokesman for the International Atomic Energy Agency in Vienna told AFP that the agency was monitoring activity at Fordow and that Director-General Rafael Grossi would present a report to the agency's member states later Monday.

Stano explained that Brussels will wait for this report before deciding what action to take.

He said, "The International Atomic Energy Agency is the recognized independent monitoring and verification authority of Iran's nuclear program. Based on its assessments, we base our decisions and actions."

His Majesty meets with NATO's Secretary General to discuss ....

His Majesty meets with NATO's Secretary ....