Thousands of Iraqis commemorate the first anniversary of Soleimani's death

Thousands of Iraqis commemorate the first anniversary of Soleimani's death 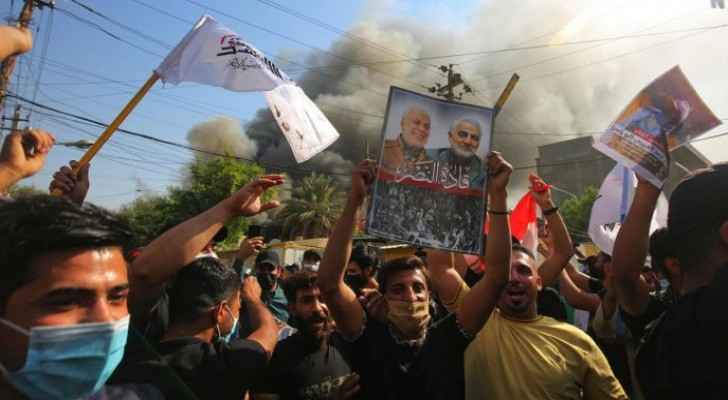 Thousands of Iraqis gathered Sunday to commemorate the anniversary of the death of Iranian Revolutionary Guard commander Qassem Soleimani, who was killed in an American airstrike near Baghdad airport last January.

Men, women and children gathered Saturday night and Sunday, wearing black clothes at the site of the attack, where they lit candles to greet their "martyrs" denouncing the "Great Satan," the United States.

The ceremony will be followed by a gathering Sunday in Tahrir Square in central Baghdad, to denounce the "American occupation."

"We tell America and the enemies of Islam (...) that we will continue the resistance despite the bloodshed," said Batoul al-Najjar, a supporter of the Popular Mobilization Forces, which the United States accuses of targeting its embassy and soldiers in Iraq with missiles.

Iranian Foreign Minister Mohammad Javad Zarif said in a tweet that "Israeli provocative agents are planning to launch attacks on Americans in Iraq" to put US President Donald "Trump in trouble because of a fabricated war."

Tehran accused the outgoing US President of seeking to create a "pretext" to launch a "war" before leaving the White House Jan. 20, after a mandate during which he launched a campaign of "maximum pressure" on Tehran.

Trump accused Tehran of being behind a missile attack on the US embassy in Baghdad on Dec. 20.

Since the third of January 2020, the US President has reiterated his firm position that “if an American is killed, I will hold Iran responsible,” referring to speculation that Americans will be exposed to other attacks in Iraq.

The hard-line stances of Tehran and Washington over the past year have thrown the world in fear of a conflict between the two parties, for which Iraq will be the scene.

After the assassination of Soleimani, Iran launched a number of missiles against bases in Iraq that contained American soldiers, including the Ain al-Assad base in western Iraq.

It also warned that those responsible for the assassination of Soleimani "will not be safe," prompting observers to expect that the greatest danger may be during 2021.

Prominent PMF leaders continually try to point out that Iraqi Prime Minister Mustafa al-Kazimi, who assumed his duties in the wake of the unprecedented October protests, is working alongside anti-authority protesters in the interests of the United States.

The Iraqis are currently living in light of severe tension and they are watching carefully what may happen in the coming weeks about the possibility of a war between Tehran and Washington, one of the main reasons for which is the assassination of Soleimani.

Two American "B-52" fighters, capable of delivering nuclear weapons, flew over the Gulf region Dec. 10, while the USS Nimitz aircraft carrier was sailing at the end of November in the Gulf waters.

The Commander of the Revolutionary Guard, Major General Hossein Salami, vowed Saturday to respond to "any move" targeting Iran, during his visit to a strategic island in the Gulf.

Salami inspected military forces on Abu Musa Island, on the eve of the first anniversary of Soleimani's assassination warning, "We will respond with an equal, decisive, and powerful blow to any step that the enemy might take against us."

Missile attacks, in particular, during the year targeted US interests in Iraq, which Washington accused armed factions loyal to Iran of carrying out.

However, as of October, the attacks decreased after a truce declared by pro-Iranian factions.

Pope Francis to arrive in Baghdad ....