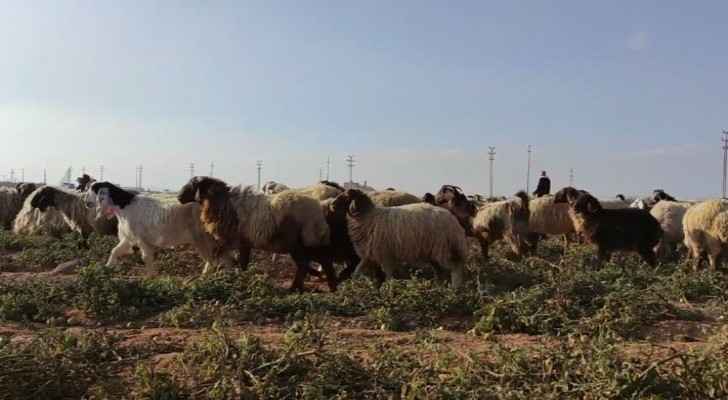 Tuesday, several livestock farmers highlighted their issues behind the procedures of exporting livestock and asked for the government to reconsider procedures behind exports due to the harsh financial burdens imposed by the pandemic.

Livestock farmers in the Mafraq governorate demanded that the government reconsider the fees and procedures governing the process of exporting livestock to the Arab Gulf states, in light of the damage witnessed due to the repercussions of the coronavirus crisis.

Livestock farmers expressed their concern about the collapse of the sector.

Several farmers told Roya Tuesday that their issues lie specifically in the high export duties to the Gulf countries, as countries importing sheep collect JD 20 per sheep, in addition to the fees imposed by the Jordanian government on each vehicle loaded with sheep, which is estimated at JD 2,100, regardless of the number of sheep within.

The farmers are limited by the weight of sheep for export which used to be 45 kilograms per sheep and is now at 35 kilograms.

Additionally, terminating female sheep exports had a direct impact on increasing financial burdens, according to livestock farmers, who emphasized that the lack of agricultural foodstuff for the sheep in sufficient quantities is another problem that persists.

On the contrary, the Assistant Secretary-General of the Ministry of Agriculture for Livestock Affairs Ali Abu Nuqta said that 512,000 male Awassi Sheep were exported to several Arab Gulf States in 2020.

He stressed that not allowing exports of female sheep aims to preserve livestock, adding that the lesser weight restriction imposed (35 kilograms) is due to this weight bracket being what is desired in the Gulf.

In terms of fees, Abu Nuqta explained that the ministry only collects fees in lieu of a veterinary quarantine, at the rate of 2.5 piasters per head for a period of 21 days, adding that if it is a private quarantine, the ministry charges only 50 percent of the amount.

Abu Nuqta pointed out that the Customs Department charges about JD 86 for a full vehicle carrying between 350-400 sheep. The government also charges JD 1,500 in allowance to support foodstuff for livestock farmers.

Pfizer-BioNTech vaccine to arrive in Kuwait ....

Pfizer-BioNTech vaccine to arrive in Kuwait ....

Pfizer-BioNTech vaccine to arrive in ....