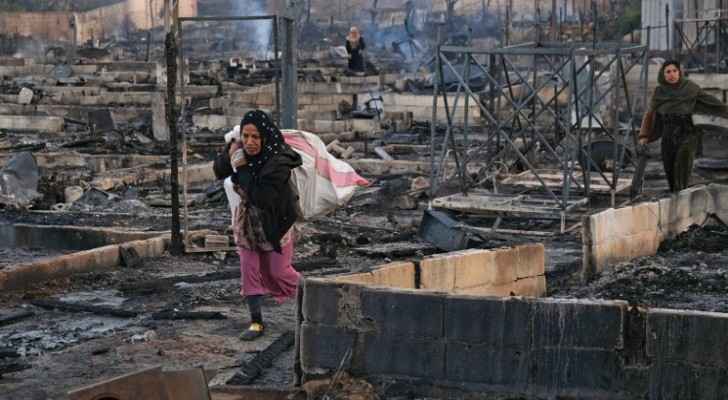 The Lebanese army announced Sunday that it arrested eight people after a dispute prompted a group of Lebanese to burn an unofficial camp for Syrian refugees in the north of the country.

An army statement said, "A patrol from the Intelligence Directorate in the town of Bahnin - Minya (north), arrested two Lebanese citizens and six Syrians, on the grounds of actions that occurred yesterday evening in the town between a group of Lebanese youths and a number of Syrian workers."

The statement added that the dispute "developed into firing in the air by Lebanese youths who also intentionally burned tents for displaced Syrians," without giving details about the reason for the disagreement.

On Saturday, the fire broke out in the camp, which houses 75 families, near the town of Hanin in northern Lebanon, in the Miniyeh area, turning the entire camp into scorched land.

The camp's 370 residents were forced to flee, according to the United Nations High Commissioner for Refugees, and at least four people were taken to hospital with injuries.

On Sunday, dozens of refugees returned to inspect the camp in an attempt to save what remained of their possessions that might have been spared from the fire.

Amira Issa, 45, who sought refuge from Homs to Lebanon with her family to escape the war eight years ago, said while crying, "We went back to inspect the contents of our small tent, so we knew that we no longer have anything, and we cannot secure an alternative shelter for us while waiting for someone to help us."

She added, searching for the remains of her belongings among the rubble, "We lost everything in one moment, and my four children lived in unparalleled terror while we escaped from the blazing fire."

The incident sparked sympathy on social media with the camp residents by Lebanese who condemned this racist act.

An official source in the Syrian Foreign Ministry expressed to the official SANA agency "deep regret" for the incident, which "led to terrorizing its residents and depriving a number of them of shelter."

The source added that Syria "renews the invitation to the Syrian citizens who were forced to leave the country by the unjust war on Syria to return to their homeland," stressing that the government "is making all efforts to facilitate this return."

The spokesman for the United Nations High Commissioner for Refugees Khaled Kabbara said that the camp residents "have been moved to informal camps nearby (...) or the residents of the area have provided them with shelter."

"We saw a remarkable level of solidarity from the Lebanese community, which provided vacant hospitals and schools to shelter them," he added.

Lebanon says it hosts 1.5 million Syrian refugees, including about one million registered as refugees with the United Nations.

The authorities have called on refugees to return to Syria, despite warnings from rights groups that Syria is not a safe country to return.

In November, about 270 Syrian families fled the town of Bcharre, also in northern Lebanon, after a Syrian was accused of killing a resident of the town, which sparked a widespread wave of tension.