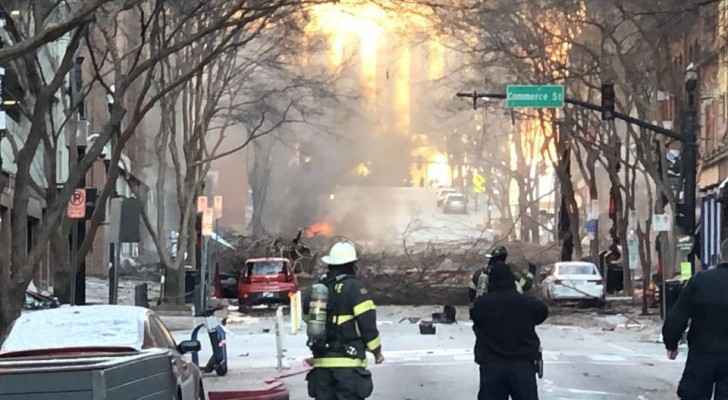 A caravan exploded Friday morning in the city center of Nashville, Tennessee, in an act that appeared to be "intentional," according to police in the southern city of the United States.

The explosion occurred at 0630 GMT (1230 GMT), causing significant material damage to the storefronts nearby.

Glass, tree branches and tiles were scattered on the ground after the explosion, while water pipes and cars were damaged.

At least three people were taken to hospital as a result of their light injuries, according to media reports from the fire department.

Security forces cordoned off the neighborhood that occurred in the blast. The Federal Bureau of Investigation (FBI) and the Federal Agency for Weapons and Explosives are involved in the police investigation of the incident.

Nashville Police spokesman Don Aaron said during a press conference that a police patrol had noticed the caravan and found it suspicious when it went to respond to a report of gunfire at the scene before the explosion, but he did not add details.

Subsequently, sappers were dispatched to the site, and police evacuated surrounding buildings before the explosion, according to Aron.

He said that several teams accompanied by police dogs are combing the area "to make sure that there are no other explosives," adding that "there is no indication" of the presence of additional explosives.

The police are also checking damaged buildings for victims.

Nashville Mayor John Cooper affirmed that "all efforts will be put in place to ensure complete security," adding, "We were fortunate" that there were no large numbers of casualties, despite the "strong but limited (material) damage."

He continued, "It happened on Christmas morning, it is a pity, but if it had happened any other morning, the result would have been worse," given that this commercial district is crowded with pedestrians on normal days.

The explosion occurred in the north of the city center near a building that is one of the landmarks of the Country Music Capital called "Batman Tower" because of its external engineering.

Residents felt the explosion kilometers away from where it occurred.

#UPDATE: Don Aaron with Metro police says it appears the RV explosion "was an intentional act." The scene at 2nd/Commerce in downtown Nashville will be active for an extensive period of time. ATF, FBI and other agencies involved in investigation. We are LIVE on @WKRN. pic.twitter.com/SfYilpVdqf

These are pictures from 2nd Avenue south. Windows were broken out from explosion area to Broadway. Please AVOID this area! Media staging is at 2nd Avenue south and KVB. pic.twitter.com/tocdpHWFgj

MNPD, FBI & ATF investigating the 6:30 a.m. explosion on 2nd Ave N linked to a vehicle. This appears to have been an intentional act. Law enforcement is closing downtown streets as investigation continues. pic.twitter.com/YOfMTaKmTH