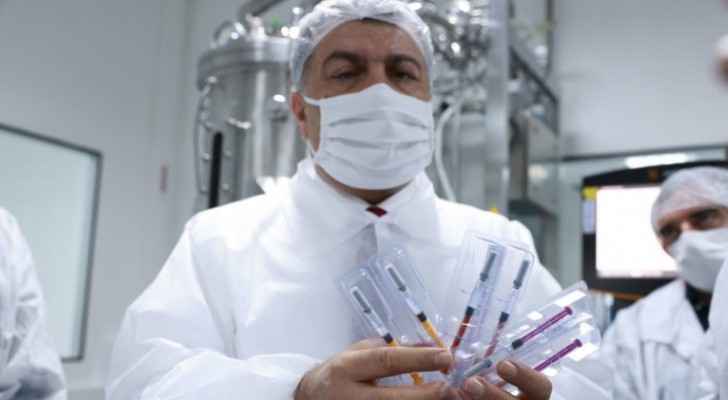 The Turkish Minister of Health, Fahrettin Koca announced Thursday that Ankara will receive the first batch of the Chinese Sinovac vaccine after showing sufficient efficacy against COVID-19 in initial tests conducted in Turkey.

Initial tests on 7,371 volunteers in Turkey showed that the vaccine is 91.25 percent effective.

The Turkish authorities remained firm in this decision despite the incomplete third phase of clinical trials, therefore sparking criticism related to the lack of transparency.

"We are now confident that this vaccine is effective and safe for the Turkish population," Koca said.

The results of the Sinovac vaccine, also known as Coronavac, were the first to be announced for the vaccine, said Koca.

The Brazilian Butantan Institute is responsible for the production and distribution of the vaccine and they announced Wednesday that the clinical trials "fulfilled the effectiveness conditions" set by the World Health Organization of 50 percent, without publishing experiment results.

However, São Paulo State Health Minister Jan Gornstein said Thursday that the effectiveness of Coronavac, despite being more than 50 percent, is less than 90 percent.

He explained to local radio that it is yet unknown to them how much more the efficacy is than 50 percent. "We do not know how much is more than 50 percent, if it is 60 percent, 70 percent or 80 percent,” said Gornstein. However it is a level that allows them to limit the impact of the disease on the population, he added.

"We knew the efficacy would never reach 90 percent," added Gornstein.

According to AFP, 13,000 volunteers participated in the trials in eight Brazilian states, with tests also conducted in Turkey, Indonesia and China.

Koca noted that the first shipments of the vaccine will be sent to Turkey Sunday.

Koca said that in the next few days Turkey will also sign a contract with Pfizer-BioNTech under which it will obtain 4.5 million doses, with the possibility of purchasing another 30 million doses at later stages.

He said that Turkey "will be able to vaccinate 1.5 million or even two million people per day," adding that the "first stage" of vaccination will cover nine million people.

UK's next phase of vaccinations to be based on age rather ....

UK's next phase of vaccinations to be based on ....

UK's next phase of vaccinations to be based on ....

UK's next phase of vaccinations to be ....