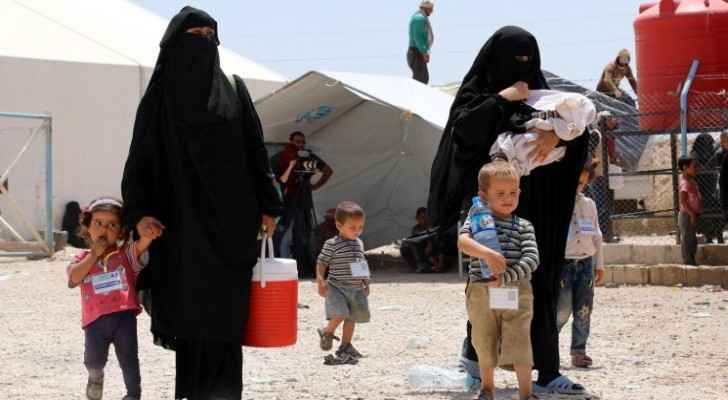 Germany and Finland announced Sunday that they had repatriated five women, and 18 children from northern Syria.

Some of the women are charged with belonging to Daesh.

The Finnish Ministry of Foreign Affairs indicated that "the camps in northeastern Syria pose a long-term security threat. The longer children remain in them without protection and education, the more difficult it will be to prevent extremism."

He said that among the children there are orphans and sick people, which made the return process "extremely necessary," pledging to take further steps of this kind "in the coming weeks and months."

German media reported that the people who returned were living in a refugee camp under Kurdish control in northern Syria.

The process marks a change for the countries, who have previously repatriated citizens through Turkey, not directly through northern Syria.

The three German women, aged 21, 24 and 38, are charged with belonging to a terrorist organization.

They arrived in Syria from 2014, two of them to marry Daesh operatives, and the third to accompany her partner, who was eventually killed, according to German media.

The German anti-terrorism prosecutor announced in a statement that one of the three women was arrested upon arrival in Frankfurt and placed in custody, while the other two remained free for the time being.

In addition to belonging to Daesh, the judiciary suspects that the detainee, identified as Leonara M., used a young Yazidi woman as a slave in Raqqa.

Her husband was a member of Daesh "intelligence" and she had two sons with him, according to the German prosecutor. She left Germany to join Syria when she was 15 years old.

According to the German newspaper Bild, there are still 70 adults of German nationality in the Kurdish-controlled camps in northern Syria, as well as about 150 children of German citizens.

According to the German Foreign Ministry, about 15 children and more than ten Finnish women are still in camps in northeastern Syria.

She explained that in total, there are more than 6,000 children and about 3,000 mothers of foreign nationalities in these camps, including 600 children and 300 women from member states of the European Union.

She added that half of the children are less than five years old.