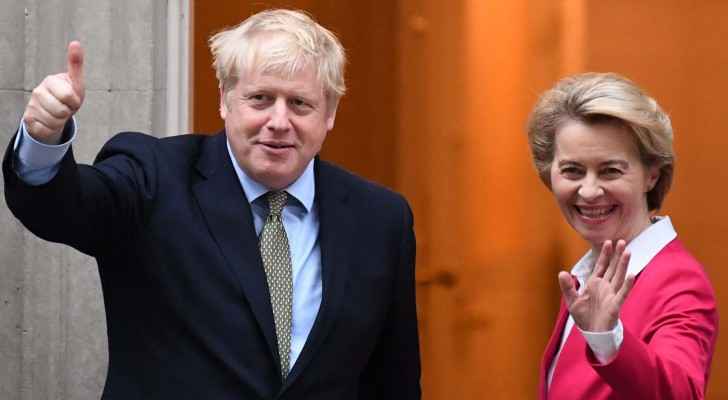 Prospects for reaching a post-Brexit agreement improved Wednesday due to progress in the fair competition file between London and the European Union, 15 days before the end of the transitional period.

But the issue of fishing remains a stumbling block.

"There are ways to reach an agreement, they are narrow, but they are there," European Commission President Ursula von der Leyen told European representatives.

"The coming days will be crucial," she stressed, noting that progress has been made on two of the three thorny issues in the negotiations, namely, the conditions for fair competition and the governance of the next agreement.

In front of the German parliament, German Chancellor Angela Merkel also indicated that "progress" was recorded at a time when British Prime Minister Boris Johnson confirmed in London that "all opportunities and hopes" were available to reach an agreement.

In terms of progress indicated by von der Leyen, the British pledged to respect environmental, social and tax standards at the level they are when the final separation takes place on December 31, thanks to an agreement on a "strict mechanism" for non-retrogression.

Progress was also made in the government support file, and "common principles" and guarantees were agreed upon from the two parties, especially by Britain, so as not to provide support to its companies randomly after their liberation from the strict European system of official support, according to what the Chairperson of the Commission said before the European Parliament deputies.

- 'Divide the ranks of Europeans' -

The European Union believes that maintaining "fair competition conditions" is inevitable to allow London access to its vast market without tariffs or quotas.

Von der Leyen announced that the differences over the dispute resolution mechanism were "resolved in large part," without providing any clarifications.

Europeans want to include countermeasures, such as imposing customs duties or partially suspending the agreement, without waiting for the dispute to be resolved through the traditional arbitration track.

These penalties can be imposed in the event of violation of the terms of competition and may include any part of the agreement. For example, the European Union may impose duties on British cars if London no longer respects environmental rules on another product.

But the issue of fishing remains a subject of controversy, and it is a sensitive file for some European countries, especially France, the Netherlands and Spain, and the British made it a symbol of restoring their sovereignty after their divorce with the European Union.

"Sometimes, we feel that we will not reach a solution," the European Commission President said in this regard.

A European diplomat said fishing was the "toughest" issue, especially as Brussels should "ensure that member states would be equally affected by the consequences" of less access to British waters.

The European source added, "There are differences between member states because the British are playing on the characteristics of fishing in each of the member states to divide the ranks of the Europeans."

And the European Union member states approved urgent measures on Wednesday to maintain air and land transport between the two banks of the English Channel for six months, on the condition that Britain adopts similar measures. These measures are still subject to approval by the European Parliament on Friday.

After officially leaving the European Union on January 31, the United Kingdom will exit permanently from the single market and the European Customs Union on December 31.

In the event that no trade agreement is reached, exchanges between London and Brussels will take place in accordance with the rules of the World Trade Organization, which means imposing customs duties or quotas.