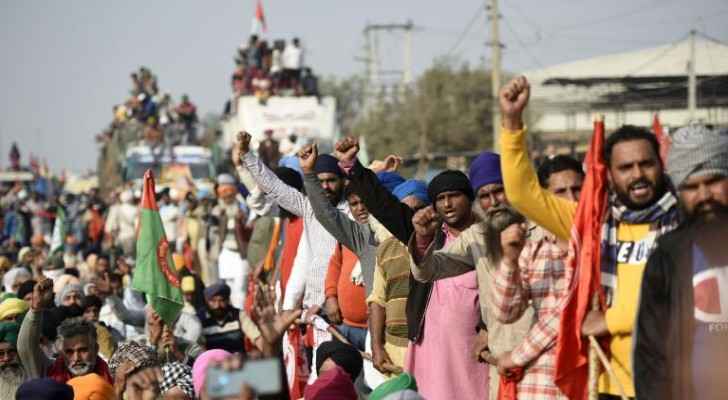 An army of Indian farmers with determination continue to besiege New Delhi in the biggest challenge Prime Minister Narendra Modi has faced during his premiership.

As the protests enter their third week, Agence France-Presse is looking at the background of the new agricultural laws, why they are stirring up opposition, and Modi's limited options.

- What is the state of the agricultural sector in India -

The agriculture sector in India is vast and turbulent.

This sector is the source of livelihood for about 70 percent of the country's 1.3 billion people and represents about 15 percent of the $2.7 trillion economy.

The "Green Revolution" of the 1970s transformed India from a country facing regular food shortages to one with a surplus and a major exporter of crops.

However, over the past few decades, farm income has remained largely the same and the sector has been in great need of investment and modernization.

More than 85 percent of farmers own less than two hectares of land. Less than one in 100 farmers own more than 10 hectares, according to a survey conducted by the Ministry of Agriculture between 2015 and 2016.

India provides an estimated $32 billion in subsidies to farmers annually, according to the Finance Ministry.

How do farmers deal with the crisis? -

Water shortages, floods and increasingly erratic weather as a result of climate change, combined with debt, have taken a heavy toll on farmers.

According to a report prepared by the Punjab government in 2017, the northern state will consume all groundwater resources by 2039.

What did Modi promise them?

India has consistently made big promises to farmers and Modi is no exception as he has promised them that these laws will double their incomes by 2022.

In September, parliament passed three laws that allow farmers to sell their crops to whomever they choose, rather than assigning agents in state-controlled markets.

These markets were established in the 1950s with the aim of stopping the exploitation of farmers and imposing a minimum payment in prices for some products, to constitute a subsidy.

This system has sometimes made farmers grow crops that are not suited to the local climate, such as rice in Punjab, which can be fertile ground for corruption.

But many farmers see minimum prices as a vital safety net and fear that they will not be able to compete with the big farms and that the big companies will pay them low sums.

"These laws will harm farmers and thus destroy our livelihood," said Sukhwinder Singh, a farmer who cycled 400 kilometers on his bicycle to participate in the protests.

"The rich will enslave the land, the livestock and the farmers. This government wants to destroy us."

These law amendments will also allow private buyers and large corporations to hoard essential commodities for future sales, which only government-authorised agents could do beforehand; and they outline rules for contract farming, where farmers tailor their production to suit a specific buyer's demand.

Additionally, one of the biggest changes is that farmers will be allowed to sell produce at market prices directly to private institutions such as supermarket chains. Most Indian farmers currently sell the majority of their produce at government-controlled wholesale markets or mandis at assured prices.

These markets are run by 'committees' made up of farmers, often mega land-owners, and traders or "commission agents" who act as middle men for sales deals, organising storage and transport, or even financing the deals.

The reforms, at least on paper, give farmers the option of selling outside of this so-called 'mandi system.'

What can Modi do?

Modi had drawn criticism before, for example when withdrawing large banknotes in 2016, but his popularity held up and he won re-election by an overwhelming majority in 2019.

Since late 2019, protests have erupted against the Modi government's citizenship law, which is considered discriminatory against Islam.

But Modi's nationalist party, the "Indian People's Party" (BJP), through its influence in traditional and social media, was able to portray protesters as "anti-patriots" before the COVID-19 pandemic finally quelled the protests.

Modi, 70, tried not to give importance to the current protests, saying that they were motivated by an opportunistic opposition that "misleads" farmers. Some in his party described the protesters, many of them Sikh, as "rioters, Sikh separatists and anti-patriots."

But it is different with farmers.

They enjoy widespread support among Indians, and ignoring them contrasts with Modi's image of herself as a hero of the poor.

In rural areas, where 70 percent of Indians live, there is a growing perception that Modi is dealing with large corporations and rich industrialists like Mukesh Ambani, the richest person in Asia.

"There are many things that are outdated in the agricultural sector. But reforms cannot be pushed in this way," political analyst Arati Jirath told AFP.

"This is the government's biggest challenge so far ... It will have to find a way to back off and save face at the same time," he added.

Universities are exploiting students in light of COVID-19 ....

Universities are exploiting students in light of ....

Universities are exploiting students in light ....

Universities are exploiting students in ....