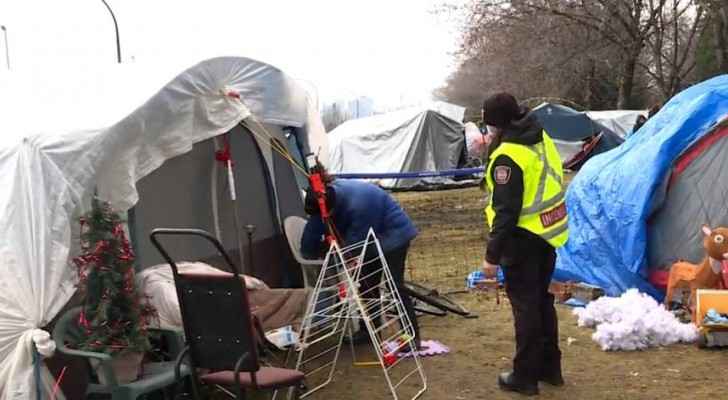 Monday, Canadian police in Montreal began dismantling a camp housing hundreds of homeless people who say they have lost their jobs and homes due to the coronavirus crisis, according to an AFP correspondent who was on the scene.

Police cordoned off the place, while riot police, along with some cavalrymen, confronted a few dozen demonstrators protesting the closure.

The city fire department ordered the evacuation of the camp after one of his tents caught fire over the weekend.

The camp was established in July and many of those who have recently become homeless have taken refuge after losing their jobs and places of residence due to the repercussions of the COVID-19 pandemic.

Many camp residents have pledged to stay there throughout the winter, despite the harsh weather.

A third of the 60 tents had been removed by midday, Louise Derouzier, a spokeswoman for the Montreal Fire Service, told reporters.

An alternative will be provided for the homeless in one of two shelters in the area, one of which is a hotel recently converted into a shelter, but not everyone is enthusiastic about this solution.

"Those who will not be able to live in the shelters, where will they go? They will flee and die in a street when the temperature is minus twenty," said Manon Sharett, who was among the protesters against the removal of the camp.

Mark Laramie, who has been helping to secure food for camp residents in recent months, has expressed "concern" about these homeless people, and said that there is a shortage of affordable housing in the city, as is the case in many other Canadian cities.

A candle caused a fire to break out in the camp Saturday, without anyone being hurt, but the city authorities indicated in a statement that the accident "could have been catastrophic."

One killed, six injured in Vancouver ....