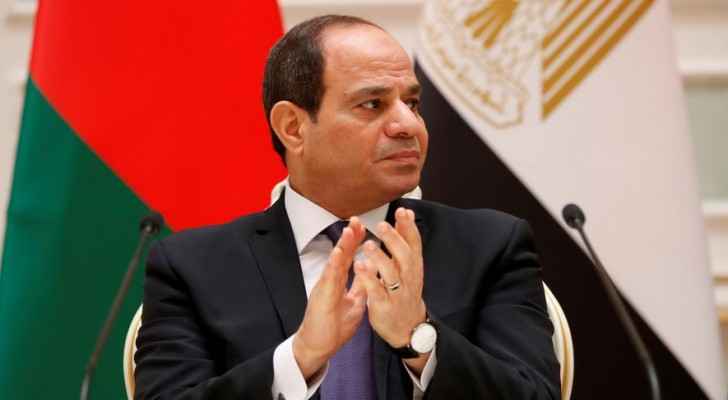 Human rights defenders expressed their "astonishment at seeing the red carpet stretched out" for the Egyptian President in France, calling on Paris to "move from words to actions" during Abdel Fattah El-Sisi's upcoming visit Sunday.

They also called on France to make military support to Egypt contigent upon the release of human rights activists from prison.

"We are amazed to see France laying the red carpet to a dictator, while today there are more than 60,000 prisoners of conscience in Egypt," Antoine Madeleine, an official at the International Federation for Human Rights, one of the organizations that will demonstrate against Sisi's visit in France Tuesday.

Sisi's "state visit" from Sunday to Tuesday includes a military march from the Invalides complex to the Elysee Palace, passing under the Arc de Triomphe, and meetings at the highest political levels.

The organizations condemned the Egyptian authorities for their "wasteful use of anti-terrorism legislation to eliminate legitimate work for human rights and to abolish any peaceful opposition."

Madeleine pointed out that after French President Emmanuel Macron asked his Egyptian counterpart during a visit to Cairo in early 2019 to "protect human rights," there has since been an "escalation in repression" that has led to "the most dangerous situation in Egypt's modern history."

He said, "Lawyers, journalists and human rights defenders are being persecuted, harassed and repressed" in the country.

He explained that "moving from words to deeds" means "stopping the sale of arms and electronic surveillance equipment from French companies in the current circumstances, otherwise they will be complicit in the repression."

The International Federation for Human Rights expressed its satisfaction with Egypt's announcement Thursday that three officials of the Egyptian Initiative for Personal Rights will be released, in response to the invitation of 17 international non-governmental organizations and personalities, including actresses Scarlett Johansson and Emma Thompson.

But he stressed that "Egypt remains a dictatorship, and if two or three people are released today, others will be arrested next week."

Human rights advocates note that France has surpassed the United States in terms of arms sales to Egypt, with the value of its deals reaching 1.4 billion euros in 2017.

Celine LeBron spoke about her husband, the Egyptian Palestinian activist Rami Shaath, one of the faces of the Arab Spring in Cairo in 2011, who was arrested "as a precaution" since his arrest on the fifth of July 2019.

Le Brun, who teaches political science, told AFP, "His file is completely empty, the accusations [of stirring and unrest against the state are] without any elements of evidence."

She explained that her husband is arrested with 13 other prisoners in a cell measuring 25 square meters and "sleeps on the floor on sheets," while he suffers from a fragile health condition.

- 'A strong and coherent message' -

Le Brun is not only defending her husband, but refers to "thousands of people arrested without evidence or under charges related to terrorism, while the United Nations criticized Egypt's use of this legislation."

Le Brun is waiting for Macron and the political officials that Sisi will meet in Paris to send a "strong and coherent message" urging Egypt to release "her husband and the other Egyptian prisoners of conscience."

Le Brun asserts that France, the European Union and international institutions "have the means to make Egypt prevail over logic."

Human rights advocates recommend that any assistance to Egypt be linked to the need for progress on human rights, which was promised by US President-elect Joe Biden.

Rights activists refute France’s assertions that Egypt is a "stabilizing factor in the region."