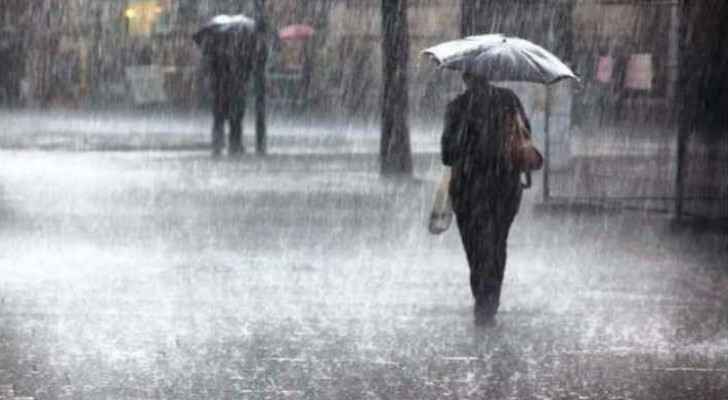 Saturday, ArabiaWeather announced that Jordan is increasingly affected by a state of air instability which will be strong in some areas, causing rainfall and thunderstorms.

Thunderstorms and rain were predicted in separate and random parts of the north, central and east of the country and the Badia regions.

Some of these showers will be abundant in some neighborhoods and narrow geographical ranges and may cause sudden torrents.

The possibility of local and sporadic rains in the southern regions during the afternoon hours is likely, with the winds being volatile and light to moderate.

Individuals are urged to pay attention to the sudden formation of torrents and flooding as a result of thunderstorms.

The chances of thunderstorms remain likely during the early hours of the night, with the effects of the atmospheric instability and rain diminishing during the late night hours.

The weather will be very cold and humid in various areas of the Kingdom, with fog forming shortly after midnight in many parts of the country.

Fog will arise, forming a significant decrease in the horizontal visibility, especially on the desert and highway roads, including the Queen Alia International Airport area.

Individuals are urged to pay attention to low horizontal visibility due to fog, especially on desert and highway roads.

Temperatures remain slightly below their averages for this time of the year, with relatively cold and humid weather in most regions of the Kingdom.

Fog will remain in some areas of the eastern and Badia plains until late Sunday morning.

Quantities of clouds will appear at different heights, with the opportunity for local and limited showers of rain for short periods of time.

The winds will be western and light in speed.

Sunday night, the weather will be cold and wet in many areas of the Kingdom.

Fog will form in the east of the Kingdom with varied light winds.