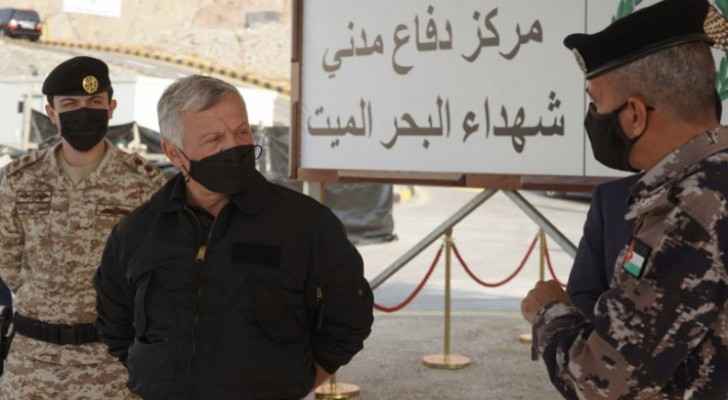 Wednesday, His Majesty King Abdullah II accompanied by His Highness Prince Al-Hussein bin Abdullah II, Prime Minister Bisher Al-Khasawneh, and the Head of the Royal Hashemite Court, visited the Dead Sea area, where they inspected the Dead Sea Martyrs Civil Defense Center and were briefed on the Zarqa-Ma'in Bridge project.

The bridge project, which began two years ago, occured in the wake of the Dead Sea tragedy wherein 22 people, most of whom were children, were swept away by flash floods near the Dead Sea.

The inspection came within the framework of His Majesty's commitment to public safety measures taken to deal with any emergency in the Dead Sea region.

King Abdullah II saluted all the comrades of arms in their different locations, and thanked the efforts of the civil defense and public security by saying, "They will be ready, God willing, to protect our sons and daughters."

His Majesty stressed the importance of sustaining the development and modernization processes of all civil defense centers to enable them to keep pace with developments, deal with any emergency, and provide ambulance and rescue services with high capacity and efficiency.

King Abdullah II also inspected the emergency boats which had recently been put into service inside the center, which will be used in dealing with water rescue incidents.

Hawatmeh confirmed that the center has 50 diving personnel and 27 rescuers who are qualified according to the standards of the International Advisory Board for Search and Rescue Teams.

He pointed out that the directorate has begun constructing a new building for the center which will be ready for operation within the next few months, indicating that the measures which have been taken come within a comprehensive strategy for developing performance.

At the Zarqa-Ma’in Bridge, His Majesty the King was briefed on the rehabilitation work which was fully completed within the project of protecting and rehabilitating eight bridges on the Dead Sea-Aqaba Road.

The Minister of Public Works and Housing, Yahya Al-Kasabi, explained to His Majesty that the work conducted included rehabilitating and diverting the Zarqa Ma’in Valley to reduce the flow velocity of torrents and water, and placing heavy rock protection in the canal to the bottom of the valley to prevent corrosion of foundations.

Kasabi explained that the Dead Sea - Aqaba Road protection and bridge rehabilitation was implemented via four bids worth JD 12 million, which are expected to be fully completed by the end of December.

Slight rise in temperatures expected over next three days: ....