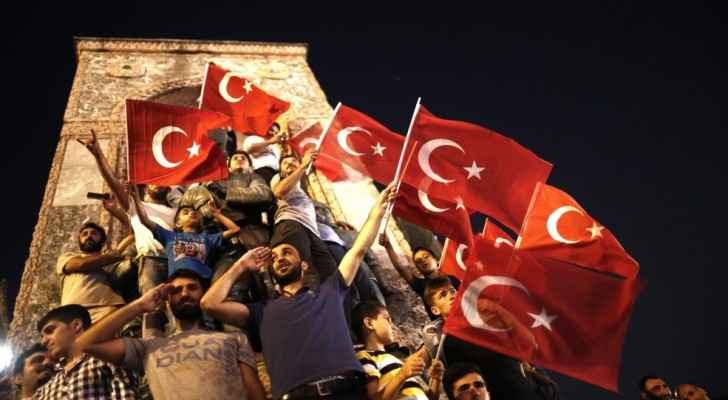 Thursday, an Ankara court sentenced 337 people, including officers and pilots in the Turkish Air Force, to life in prison, concluding the main trial related to the failed coup that targeted President Recep Tayyip Erdogan in 2016.

These people were convicted of "attempting to overthrow the constitutional order," "attempted to assassinate the president," and "premeditated murder," according to what was stated in a summary of the verdict, of which Agence France-Presse obtained a copy.

Among those sentenced were pilots who bombed several important sites in the capital, Ankara, such as Parliament, and officers and civilians who led the coup attempt from the Kanji base on the night of July 16 2016.

Sixty people were sentenced to prison terms of various periods, while 75 were acquitted at the end of this trial, which included about 500 accused.

The failed coup caused the deaths of 251 people, and injured more than 2,000. The failed coup triggered a massive purge in the country and prompted Erdogan to expand his powers.

Erdogan accuses preacher Fethullah Gulen of planning this coup attempt. Gulen, a former ally of the Turkish president, lives in the United States and denies he is behind the coup attempt.

The trial, which concluded Thursday, began in 2017 in the country's largest courtroom in the Senkan prison complex in Ankara province.

Despite the outbreak of the coronavirus, many of the relatives of the victims attended the session Thursday, which took place amid tight security measures.

In the morning, part of the verdicts were read, with 27 defendants announcing the death sentence. The full text of the provisions will be published later Thursday.

At the end of the session, Afaq Yaghin, head of the Association of Victims' Relatives, told France Press: "Justice has been achieved. The state has not allowed the blood of the martyrs and the wounded to be wasted."

Since the failed coup, the Turkish authorities have relentlessly pursued the Gulenists and launched a purge campaign on a scale unprecedented in modern Turkish history. Tens of thousands of people have been arrested and more than 140,000 have been laid off or suspended from their jobs.

The waves of arrests are still continuing, even though the pace of arrests has decreased in recent years. Other trials are still underway with more accused. More than 520 people are being tried in a case related to the activities of the Presidential Guard.

At least 290 trials related to the attempted coup have completed, while nine others are continuing.

Courts have so far convicted 4,500 people and sentenced nearly 3,000 of them to life imprisonment, according to official figures.