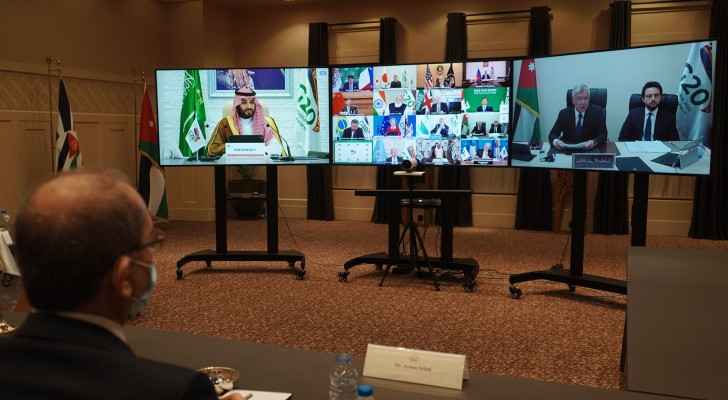 His Majesty King Abdullah II participated as a guest of honor in the G20 Leaders’ Summit, held by Saudi Arabia virtually, stressing the need to combat the impacts resulting from COVID-19.

Saturday, His Majesty explained that food security, poverty, unemployement, and education have been impacted severly and led to humanitarian and economic implications worldwide due to the COVID-19 repercussions.

Additionally, His Majesty King Abdullah II stressed the need to protect vulnerable communities around the world, including refugees and families living in poverty from coronavirus.

His Majesty urged all G20 leaders to work towards re-globalization which ensures enhanced cooperation on international and regional levels.

Minister of Foreign Affairs and Expatriates Ayman Safadi, Advisor to His Majesty for Policies Haifa Khraisha, and Minister of Planning Nasser Shraideh additionally attended the summit on behalf of Jordan.

The theme of the G20 Summit was "Realizing Opportunities of the 21st Century for All," as part of the G20’s efforts to protect the global economy amid the coronavirus crisis.

The G20 is the world's leading forum for international economic cooperation, and it includes leaders from all continents representing developed and developing countries.