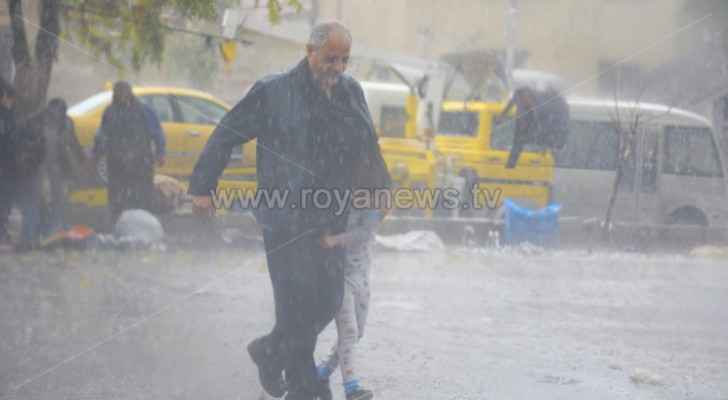 The ArabiaWeather website announced Jordan begins to be affected by unstable weather conditions Friday afternoon, with clouds multiplying at different heights and chances of rain and thunderstorms increasing in different areas of the Kingdom.

Some of these showers may be abundant in several neighborhoods and narrow geographical ranges, which may cause a rise in water levels and flash floods in sloped or low-lying areas.

Chances of thunderstorms decrease in the evening hours. However, during the late hours of the night, thunderstorms may commence in the northern regions of the Kingdom, with a chance of these showers extending to parts of the central regions shortly after midnight and into the dawn hours.

Since Friday is a total lockdown, the recommendations are limited to the need for caution by residents in low-lying areas in case of high water levels during a thunderstorm.

There will be a significant drop in temperatures but chances of rain will decrease. The temperatures for this time of the year will be lower than usual.

Low chances of rain remain during the morning hours, especially in the North of Jordan, but the chances decrease as the day commences.

Saturday and Sunday night will be the coldest so far since the start of the season.

A significant drop will be witnessed during the nights of Saturday and Sunday, with temperatures in some of Badia and the eastern plains decreasing to less than five degrees Celsius.

Frost may form in those areas on the dawn of Sunday.