Child labor on the rise in Jordan: Jordanian Labor Observatory

Child labor on the rise in Jordan: Jordanian Labor Observatory 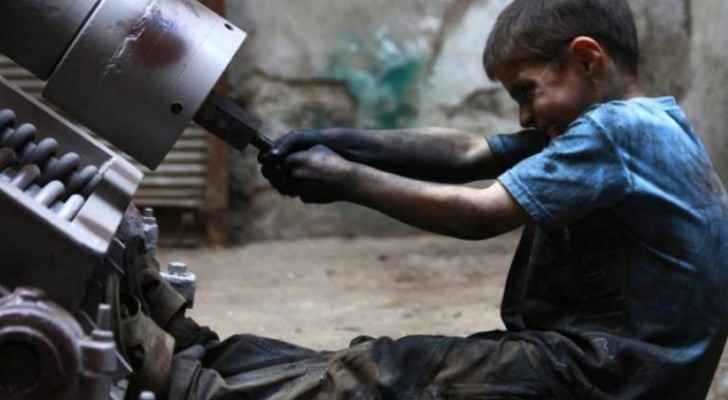 On the occasion of World Children’s Day, Tamkeen for Legal Aid and Human Rights issued a report indicating that the most vulnerable group in Jordanian society is working children, who are being forced to enter the labor market by their families to increase family income.

Families are forcing their children to work to simply make ends meet, or because the legal guardians are unable to work, making the children the only breadwinners.

Preliminary studies for the report found that families of working children are relatively large with six to nine members and the parents usually have a low level of education.

Child labor is concentrated in several sectors, including services in restaurants, retail stores, construction, blacksmithing, mechanics, and carpentry. Most of the children receive less than the minimum wage of JD 220 ($ 310), and often work long hours that are not compensated.

The report found most children are working in hazardous work environments, especially in the construction, blacksmithing and mechanical sector.

These work environments are even considered unsuitable for those over the age of 16.

Children work six or seven days a week for more than eight hours, claimed the Tamkeen report, with working hours sometimes reaching 16 per day. This is confirmed by 72 percent of the respondents who asserted the existence of exploitation of working children in terms of their low wages or pressuring them to work long hours.

According to 90 percent of the families, the children are exposed to a variety of risks of injury at work in the absence of public safety tools. In addition, 10 percent of families claim that the children acquire abnormal behaviors, such as staying up late and using obscene language.

17 percent of respondents said that children are subjected to verbal threat or abuse by some employers.

Children in the agricultural sector are working six to eight hour work days with low wages on a daily basis ranging between $1.50 to $2, said Tamkeen.

There is a lack of occupational health and safety conditions and a lack of adequate tools for agricultural work, exposing children to respiratory diseases from inhaling pesticides.

One mother from the study claimed her child began work at age six as a street vendor as her and her husband were not educated to work. The child worked for more than eight hours a day, and was exposed several times to verbal abuse by the employer who supplies him with goods tpo sell to citizens on the street.

Another said, "my nephew works in construction even though he is 16 years old. He had to because his father passed away and needed money to help his family, and now, he smokes all day due to his working conditions."

The Jordanian Labor Observatory warned of an increase in child labor in Jordan due to overwhelming poverty and unemployment and the continuation of the distance learning policies, calling for a review of the various economic and educational policies that are being applied in Jordan in light of the coronavirus crisis.

The Jordanian Labor Observatory, affiliated with the Phenix Center for Economic and Informatics Studies, stated in a position paper issued on the occasion of World Children's Day that the number of children involved in the labor market is significantly increasing, and most of them belong to poor families who are driven by their need to allow their children to join the labor market.

The Darsak platform, which provides distance education services to public schools claims only 70 percent of students have access to their services, leaving an estimated 440,000 children vulnerable and unable to attend school online.

There are no new studies showing the effects of the coronavirus crisis on child labor, with the last official statistical indicators issued in 2016, which indicated that there are approximately 70,000 children in the labor market who meet the description of child labor in violation of all Jordanian and international standards.

Monster Creation: The Fruit of Child Abuse and Neglect

Monster Creation: The Fruit of Child Abuse and ....

Monster Creation: The Fruit of Child Abuse and ....

Monster Creation: The Fruit of Child ....