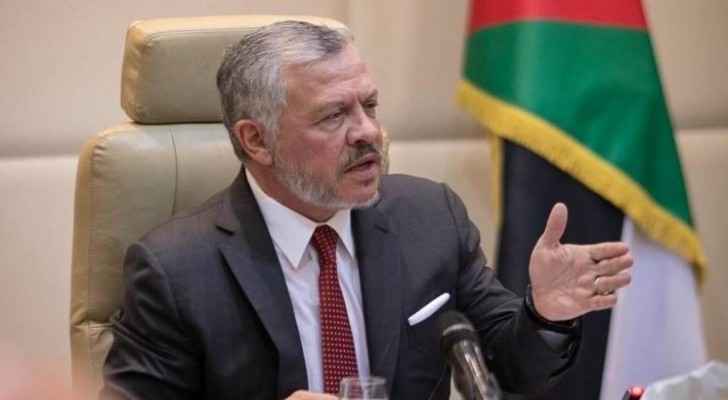 His Majesty said that protecting Jordanians and their health is a priority, stressing the need to impose the rule of law to protect citizens, and not to act out of "fear."

King Abdullah II expressed his appreciation to the armed forces and security agencies for their efforts to impose the Rule of Law, stressing that no one is above it. In addition, the King expressed great confidence in the awareness of Jordanians in dealing with the coronavirus crisis.

His Majesty explained that everyone in the Kingdom are partners in fighting COVID-19, calling on citizens to adhere to wearing masks and maintaining social distancing.

Khasawneh confirmed that the occupancy rate of beds in the public sector hospitals is still within acceptable limits, and that efforts and procedures are continuing to raise the capacity of medical equipment within hospitals, including ICU beds and ventilators.

Khasawneh said that the government has developed several scenarios to deal with the health situation according to a formula which balances health benefits, economic and social impacts, while making preparations to update the procedures and scenarios according to the developments of the coronavirus crisis in the Kingdom.

Moreover, the PM confirmed that based on the royal directive, the crisis cell at the National Center for Security and Crisis Management will be reactivated, in order to ensure a rapid response to deal with the coronavirus crisis.

In addition, the PM presented the efforts and measures taken by the government during the last few weeks, which increased and strengthened the capabilities of the health sector in the Kingdom.

The measures also included the increase of clinical capacity and medical and nursing staff, in addition to measures related to the protection of medical personnel that constitute the first line of defense in dealing with the pandemic and its repercussions.

He pointed out the continuous coordination between the Ministry of Health and the Royal Medical Services in dealing with the health situation, especially with regard to hospitals and their maintenance in serving citizens during dealing with the coronavirus crisis as well as public health care.

He pointed out that Defense Order No. 23, which was issued Monday, would expand the intake capacity of hospitals by having the Ministry of Health have certain controls on any hospital completely, or partially, to combat any COVID-19 bed shortages.