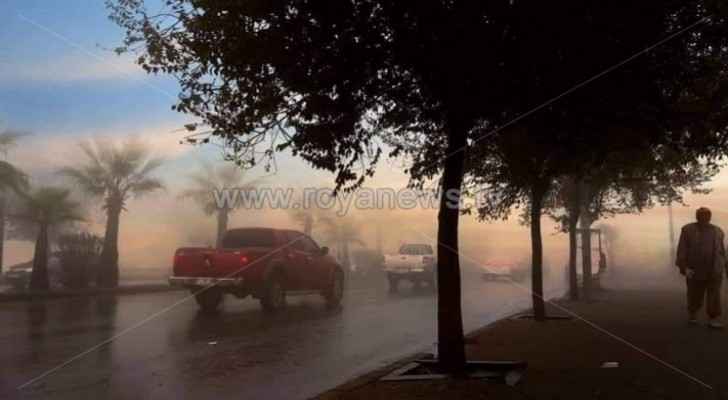 ArabiaWeather published a weather forecast for the Kingdom Saturday showing average temperatures for this time of year. The website stated that local showers are possible during the afternoon hours in different areas of the Kingdom.

Jordan will experience an extension of the air depression all throughout next week. Southeastern winds will be moderate to brisk, and will cause dust in some areas.

The weather remains relatively cold, with quantities of clouds appearing at different altitudes.

Local thunderstorms are likely to fall in some parts in the Kingdom.

The winds will be light and volatile, later turning southwestern and moderate.

Jordan is affected by an extension of an atmospheric depression in all layers of the atmosphere accompanied by a relatively cold and humid air mass. During the day there will be a significant drop in temperatures. Temperatures will be below their average for this time of year by about three to five degrees.

The weather will turn relatively cold, fluctuating between partial cloudy and cloudy, while sporadic showers are expected in the north, center and some parts of the south of the Kingdom.

The western to northwestern winds will be moderate or brisk at times.

The weather is relatively cold and humid in most regions, which fluctuates between partially cloudy and cloudy. Scattered showers in the northern, central, and some southern parts of the Kingdom will be seen.

There will be a high chance of fog over mountainous areas, due to the passage of low clouds which touch the surface of the earth.

The northwestern winds will moderate and active at intervals.

Pay extra attention to surroundings due to the low horizontal visibility from fog and clouds touching the ground over mountainous heights.

Jordan remains under the influence of the remnants of the relatively cold and humid air mass which accompanies the depression, making daytime temperatures remain below their usual rates for this time of year by about 3-5 degrees Celsius.

The weather is cooler than usual, with the appearance of low clouds.

Some rain showers will fall in the north, and some central regions of the Kingdom for short periods, with western moderate winds.

The weather is cold and humid in most regions.

Fog is expected to form in different parts of the eastern plains, including Badia, during the late night hours and dawn, with light winds.

Pay extra attention to the surroundings due to the low horizontal visibility from fog and clouds touching the ground, especially in the eastern plains and the Badia regions.