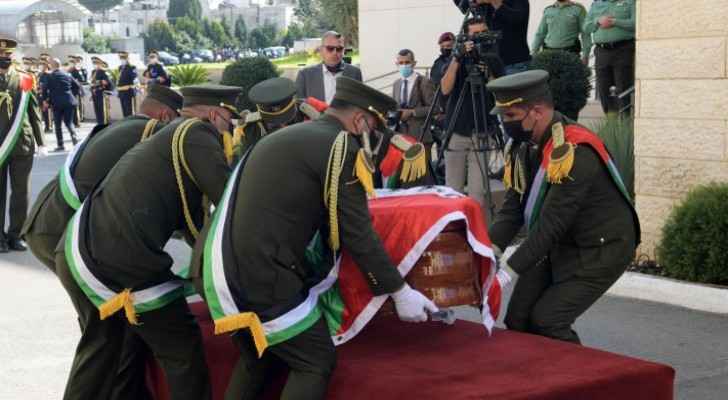 The body of Palestinian diplomat, politician and Secretary General of the Palestine Liberation Organization (PLO), Saeb Erekat has been laid to rest Wednesday.

Upon the arrival of the coffin to the presidential residence, guards of honor lined up and carried his coffin while the Palestinian national anthem and funeral music played.

President Abbas and other participants gave a final farewell and placed a wreath on his coffin, before the funeral procession headed to his hometown in Jericho for his burial.

The funeral procession of the late Erekat stopped in front of the PLO headquarters in Ramallah where his former colleagues and employees of the organization, gave their last farewell, prayed, and paid their respects.

The funeral procession will soon stop in front of the late Erekat’s house in Jericho for final farewells before going to the Old Jericho Mosque for prayer.

Finally, a military ceremony will commence towards the Jericho cemetery for his burial.

His Majesty extends condolences over the death of Saeb ....

His Majesty extends condolences over the death ....

His Majesty extends condolences over the death ....

His Majesty extends condolences over ....