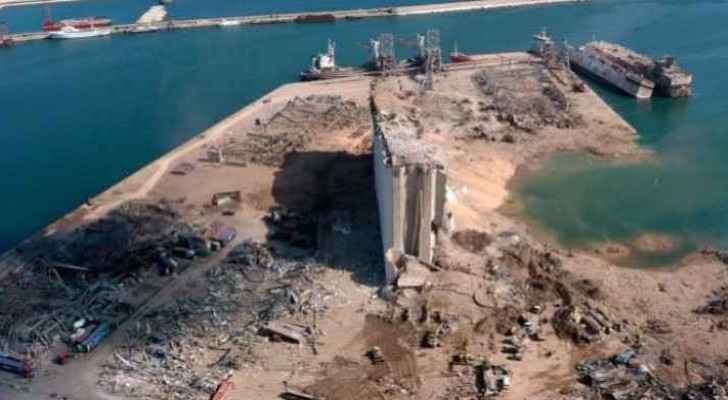 Norma was leaving her apartment in Beirut when she suddenly collided with a cloud of dust in front of her, only to find that it was caused by the fall of a part of a nearby archaeological building that was destroyed by recent rain in Lebanon after being damaged in the Beirut Port blast.

"We were born here, we grew up here, the whole neighborhood is like our home, we know every corner of it (...) and here we are losing the scenes of our son and we grew up with it," says Norma Muschat, in her fifties.

"The building should have been better reinforced," she added. "This is all a result of state neglect, neglect of everything."

Rmeil 24 is one of Beirut’s many ancient buildings dating back to the Ottoman era. Although it was deserted for more than 40 years ago, its ground floor housed one of the most famous ice cream shops, the Hanna Mitri store, which was a major destination for tourists and Beirut residents, before its roof collapsed completely due to the explosion of the port, which forced him to change its location.

Like a number of other buildings, Rmeil 24 also did not withstand the onset of the rains, which fell heavily for a week in Beirut.

The horrific explosion at the port on August 4 killed more than 200people and injured more than 6,500. It also caused damage to about 70,000 housing units, and brought about a long history preserved by traditional buildings with their ornate walls, colorful windows and high arches, before they were transformed into mere facades with huge gaps.

Ninety monumental buildings are now threatened with collapse with the start of the rainy season, according to what the Minister of Culture in the caretaker government, Abbas Mortada, told AFP.

"We lose a lot in Lebanon," says Carla, 52, who also grew up near the Rmeil 24 building. "We experience a new trauma every month." "This is our heritage and ours (...) It is unfortunate that it goes this way," she added.

Engineer Yasmine Makaroun, a volunteer in the restoration effort undertaken by the Association to Encourage the Protection of Natural Sites and Old Buildings in Lebanon, explains that rainwater has doubled the holes in the roof of the building, leading to its "partial collapse."

She explains that he could have been saved had the landowner not been late in allowing repair workers to access it, noting that they could have strengthened the building within ten days before the rains began. "We could have started with the first stage (...) and saved him, even partially," she says.

Lebanon, which is witnessing an accelerating economic collapse, exacerbated by the explosion of the port, depends on foreign aid to rebuild and restore the affected neighborhoods. However, the international community, which pledged more than 250 million euros immediately after the explosion, insisted that the aid not pass through state institutions accused of corruption, but rather under the auspices of the United Nations and directly to the Lebanese people.

Mourtada says that "the international organizations do not pay enough attention" to the issue of ancient buildings. "There is a deficit in the capabilities of the ministry," he added, especially in terms of the technical and engineering staff.

In the nearby neighborhood of Gemmayzeh, trucks filled with aluminum sheets pass by a street that has changed features. The number of construction and restoration workers exceeds the number of pedestrians, who speed up the footsteps as they pass by the buildings for fear of collapsing a wall here or a roof there.

Workers are busy clearing the rubble of an ancient building that a Chilean relief team thought in September had detected a heartbeat before it was later disappointed.

A few kilometers away, the Karantina area adjacent to the harbor appears most vulnerable. On Wednesday, rain caused the collapse of a building that was the first casualty of the stormy season.

While workers and volunteers of an aid organization were raising its falling stones on the street, others were busy reinforcing the wall of another building on the opposite side.

Red and yellow ribbons surrounded many buildings, and next to them were signs warning citizens not to enter or approach them.

Karantina is one of the poorest neighborhoods in Beirut, and many Syrian and foreign workers have taken it as their home, and the explosion added to the suffering of its residents due to its location adjacent to the port.

A Syrian looks at a modern building that was not accompanied by the explosion, his eyes watering, and it was not enough that he was a witness to the disaster, but that he is still living its repercussions.

He says, "We cannot say anything .. We only have God."